Nongogo: Feelings probed inside a shebeen 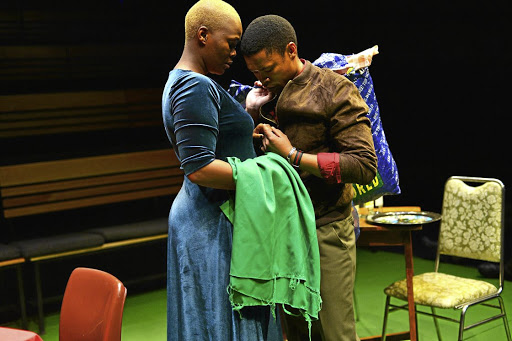 There is nothing more pleasing to a theatregoer than seeing an actor cry during a performance.

It was a sight to behold last Thursday when actress Zikhona Sodlaka took the audience along with her as she explored the emotional journey of her character in the play Nongogo.

This classic play by Athol Fugard is on at the Market Theatre in Newtown, Johannesburg.

Nongogo is a powerful story set in a shebeen during the 1950s.

The story is told through a shebeen queen known as Queen. She had been forced into prostitution, but dumped the seedy life and got a fresh start when she opened her establishment.

She manages to hide her real past successfully until a young man who sells tablecloths - known as Johnny - comes along.

She is prepared to turn her life around, even stop selling liquor, just to make sure her Ben 10 is happy.

They tentatively explore a relationship which is disrupted by jealousy as her friends Sam and Blacky ruin things.

Directed by James Ngcobo, the star-studded cast does not disappoint.

The five actors give a splendid and flawless performance.

Sodlaka, who took up the role of Nongogo for the first time, is in her element. She brings the shebeen queen character to life.

She is able to do what many actors fail to do - lay their emotions bare.

Ngqobe is so honest in the portrayal of little Johnny that the audience can easily relate to Johnny's pain. Go see it.