A love of hip hop led 2PMDJs to bigger things 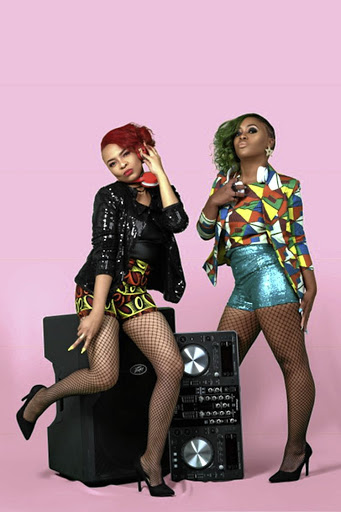 Nhlanhla Nciza has a set of aces up her sleeve.

The first lady of Mafikizolo has set two women on the path to music greatness.

Last week she unveiled 2PMDJs, a duo of club DJs from her hometown Kagiso in Krugersdorp.

They both share the name Palesa and their surnames begin with the letter M, hence the name 2PMDJs.

Palesa Manne and Palesa Maakwe believe it's their time to shine. They are a rare breed in the industry that is so heavily dominated by men.

The two knew each other in high school and discovered their mutual love for hip hop whenever they bumped into each other at events in the township.

Manne says they looked around and saw there was a shortage of DJs playing hip hop, more so females.

"We decided to do something about it. We searched for DJ schools on the internet and signed up at DJ Zinhle's Fuse Academy in Melville, Johannesburg, and attended Saturday classes," she shares.

Sadly, they had to quit due to financial problems. But luckily for them, revellers in Kagiso, Soweto and even Durban had already taken note of them and gigs started streaming in.

Manne left her job at SA Revenue Service as a tax consultant and invested her money in music equipment.

They had always admired Nciza their homegirl and tagged her in all their social media posts.

A chance meeting with her in Durban at a gig was their breakthrough.

Nciza was immediately sold and signed them to her stable, Home Base Records.

"More than talent itself, I look for people who are dedicated, hardworking and focused. These girls have all those qualities and are passionate and driven. They are not depending on me, they come up with ideas - and it's the cherry on top that they are female."

Manne enthuses: "We just want to change the game by working with women. We are very happy to be signed to a stable owned by a woman we admire so much.

"There is a big market of women who have a craving for hip hop.

"We also have women who are curious about what we do and as we rise, we should lift others. We couldn't be happier."

Adds Maakwe: "We have learned so much, and there is still plenty to learn, Nhlanhla has been a great guide to us.

"We would love to succeed on the African continent, that's the biggest thing to us."

Their first singleUnderwater, featuring The Big Hash, was released last Friday to a great reception.