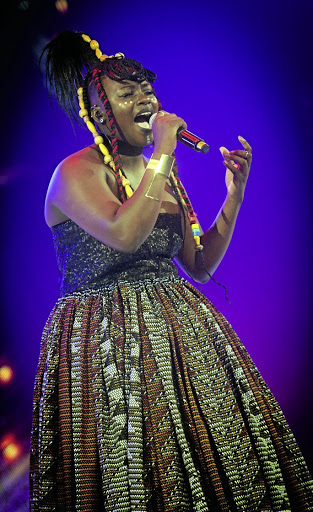 It's a case of "not so fast" for Amanda Black.

The much-loved songbird has found herself in a fix after her big announcement this week that she was quitting her record label Ambitiouz Entertainment.

Sowetan understands that even though Amanda was given the green light to find a new manager, she is still indebted to Ambitiouz which released her first album Amazulu, which earned her a few SA Music Awards trophies and catapulted her to national stardom.

According to a source close to Amanda and the record company, the multi-platinum selling hitmaker still owes Ambitiouz two more albums.

Speaking through her publicist, Bonnie Meslane, Amanda could not confirm nor deny her current position with the record label.

"Amanda is still looking around, having meetings with potential managers and nothing has been confirmed
as yet.

"I can't confirm nor deny whether or not she still has to release two more albums like you said, but you have to understand that there are contractual 'things'," Meslane said.

She declined to divulge any further details on why she left Ambitiouz but said the star's new manager will handle her bookings, publicity and manage the brand Amanda.

Amanda, whose real name is Amanda Benedicta Anthony, 24, made it public that she had parted ways with Ambitiouz and that they will no longer manage her.

"I am very grateful for Ambitiouz Entertainment and how far we have come. I am embarking on a new journey as I needed a team that will look after my bookings, brand and publicity as well as assisting me reach wider audiences in Africa and beyond," Amanda said in a statement at the time."

She added that she had to part ways with the record label due to "contractual disputes".

"The decision to source new management came after Amanda and the label could not agree on certain terms," the statement read.

When contacted for comment, Ambitiouz Entertainments head of PR Gaba Sebego asked that questioned be emailed to her but had not responded by time of going to print.

It was a star-studded affair last night at the South African Music Awards (Samas) nomination party.
Lifestyle
3 years ago
Next Article