Siya Sintwa says he was in Johannesburg, not Mbombela, when the bill was run up.
Image: SUPPLIED

A former aide to ex-president Jacob Zuma has denied that he is "the blesser" who is entangled in the drama involving "slay queens" and a R37 000 nightclub bill.

Siyabulela Sintwa, who was Zuma's Luthuli House personal assistant, was named on social media as the man who left a group of women stranded with the bill at Zero13 Lifestyle Club in Mbombela (Nelspruit), Mpumalanga, on May 27.

But yesterday, Sintwa said he was nowhere near Mbombela on that day.

"I don't know who the person they were with was but it is not me. On the 27th I was at Meat Lounge in Sunninghill, Johannesburg, and then I came to Cape Town on Wednesday and I have been here for two weeks. I don't know who put my pictures up."

Sintwa's picture began making the rounds on social media following the circulation of a video of a group of scantily dressed and stranded women allegedly dumped by a "blesser" without settling the R37 340 booze and food bill.

The bill, which also circulated widely, shows the table ordered expensive alcohol including a bottle of champagne costing R25 200, a bottle of Glenfiddich whisky for R3 200, Hennessy brandy for R1 000, while R5 000 was spent on ciders and R950 on food platters. 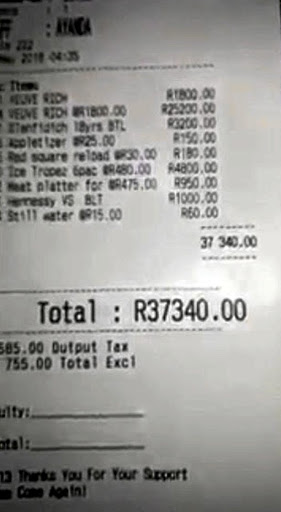 Sintwa did not deny that this was the kind of lifestyle he is used to. "If it was at Taboo or Cubana then I would even doubt myself, but not in Nelspruit. The location was wrong. I won't spend R37 000. At least R10 000. I normally go out with at least two or three girls, not 14 girls. It can't be me."

He suggested that he may be a victim of a bitter rival. "Maybe it's someone who is scorned because I took their girlfriend because I am capable of that. I really don't know who that person is. Someone is just dealing with my character ... I don't know who they are."

Zero13 Lifestyle posted on social media: "The bill was paid . We would like to ask people to refrain from reposting or posting these stories as they are unfounded and far from true."

Former aide to ex-president Jacob Zuma, Siyabulela Sintwa, issued a statement denying statements he had made on record to Sowetan. Sowetan stands by the story and has a record of the interview.