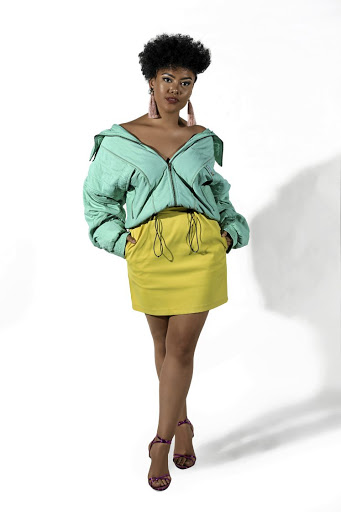 Carissa Cupido of YFM has loved radio from when she was a little girl./Supplied

Like a southerly gale force wind from Cape Town, Carissa Cupido has swept into Johannesburg.

She is behind the mic on YFM and doing great things for herself and the station with her refreshing approach.

The sassy lass from Strandfontein, near Mitchells Plein, says her life has not always been this hectic. She was a mousy, sheltered kid who interacted with only the neighbours and spent most of her time indoors.

She was bound to be a bit of an outcast because she went to model C schools and didn't have the local accent. She says her view of the world was also different to the other children's.

Cooped up in her little world, radio became a conduit to feel okay, an escapism from the clutches of her "super Christian" mother who wouldn't let her listen to secular music.

Stolen moments sneaking in a listen on KFM and hearing what was regarded as "devil music" on Nicole Fox's show set her soul on fire.

Fate landed her at CCFM Christian radio where she did some job shadowing and immediately felt at home and knew that when she got to University of Cape Town to study English, media and anthropology she would wind up on campus radio - and that came to pass. "I was my most true self on radio and made friends. I started off as a newsreader, I was the bearer of bad news and I didn't like that, I wanted to be a joy bringer.

"There's a new Bongile Mantsai all of a sudden. Your own family wants to take pictures with you and you're like 'come on'. People want to prove to ...
Entertainment
3 years ago

"So, I did the graveyard shift. I lived in Strand and used to take a bus or sleep on campus," she remembers. Her parents had become more understanding.

She landed a bigger slot and Cupido says she felt that a big purpose was at play. After graduating with honours and then being unemployed left her disillusioned.

"I had two degrees from UCT but was broke and felt stuck. Things eventually worked out when my boyfriend submitted my demo at Good Hope and I landed a job at one of the oldest radio stations in the country doing graveyard," she says.

After a while, something pulled her inland and she cancelled her lease and quit the job, packed her bags and moved to Johannesburg. "I knocked on doors and lived on prayer and faith, until YFM happened."

She did graveyard once more until earlier this year when she upgraded to the prime evening spot of 7pm to 10pm Mondays to Thursdays.

"All I want is to have conversations. With my show Run This Town, here's a Cape Town native running this town.

"Mine is a new recipe. I'm hoping to have a blueprint of what good radio should be. The feedback has been that it's refreshing.

"My co-host Sibu Mpanza and I bring conversations from off-air to on air, topics like harrowing unemployment figures, money, financial freedom, sex, pop culture, colourism, black and coloured South Africans and what it means - not fluff radio.

"A common thread in my life has been how badly do you want in. And my response is 'I really want this'. I always position myself as a lifelong learner. I really don't have it all figured out. There's so much room for error and growth and I enjoy the woman I am becoming."