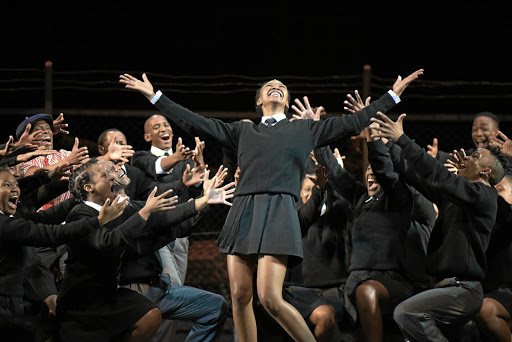 Hit musical Sarafina! is set to make its debut at the Joburg Theatre's Nelson Mandela Stage in Braamfontein next week.

The musical, that has wowed international audiences, has scored a brief season at the up-market theatre. The show starts on June 14 and ends on June 24. Directed by award-winning theatre icon Mbongeni Ngema, the show will be celebrating 42 years since the June 1976 uprising.

Ngema told Sowetan this week that he was approached by the Joburg Theatre after the Tribute to Hugh Masekela musical concept that was staged at the same venue.

"Sarafina! was part of it and people loved it. Joburg Theatre realised that people were still hungry for Sarafina!."

Ngema said he was excited the show has made it to a stage like the Joburg Theatre, which was previously regarded as "white". "I think they have done well to market it because the season was never planned. It was a pronto thing."

Makhaola Ndebele, artistic director at the Joburg City Theatres (Joburg Theatre and Soweto Theatre), said it was befitting that South Africa's most successful theatrical export was finally coming to the Nelson Mandela Stage.

"A new generation of theatre-goers will get to experience this rich musical legacy and reignite the believe within young people that South Africa is able to produce work that is among the best in the world," Ndebele said.

Last year, Sarafina! had a successful run at the State Theatre in Pretoria.

Sarafina! is a story that depicts students involved in the 1976 Soweto Uprising fighting against oppressive apartheid laws and Bantu education.

It was created in June 1986 and premiered at The Market Theatre in Johannesburg in June 1987, with veteran actress Leleti Khumalo playing the lead role of Sarafina.