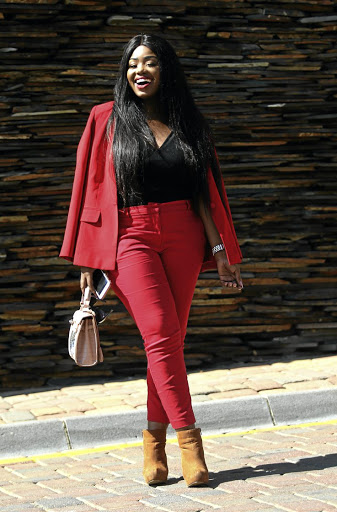 Uzalo star Nokuthula Mabika learnt from a young age to be independent and fight her own battles.

The actress was raised by her father with her seven siblings - by six different mothers - and was taught to be strong.

"We are a big family, and we were all raised by my father with so much love. He taught me at a young age to be strong and to be able to fight my battles in life," Mabika, the first born, said.

"As a result, I tend to approach things from a man's perspective, a quality that has made me to be emotionally strong."

Born and raised in New Germany, Durban, Mabika is fast making a name for herself on TV.

She was introduced to Uzalo viewers as Thobile, a girlfriend of Mastermind (played by Ntokozo Dlamini), KwaMashu's famous thug. She now owns a salon on the show and has been juggling managing this venture and her dramatic personal life.

At the beginning she was given one of those D-storylines that could either survive or die depending on the actor's efforts. But Thobile's character has since evolved in the past seasons to become one of the core of Uzalo.

The bubbly Mabika tells Time Out it has been an amazing and beautiful journey for her to portray. She says what makes it easy for her is that both Thobile and Nokuthula come from Durban.

"We almost have similarities but not completely. I find it easy to portray her because I'm from Durban."

Mabika, who started her career acting in Mzansi Magic films, says the role of Thobile is her biggest on TV. After itching for a break, it came in the form of Uzalo.

Siyabonga Shibe: People would always ask me why I rode in a taxi

Uzalo actor Siyabonga Shibe used to ride around in a taxi with his cap over his face.
Lifestyle
4 years ago

She admits that though it took her time to get used to the character due to different dynamics, she is now enjoying it.

Since it was her first big TV role, Mabika was star-struck. She could not believe that she was on the same set with stars like Leleti Khumalo.

"At the beginning, I was trying to understand the character and get used to the atmosphere in the set. I was also pinching myself because it has been my dream, and to finally see it happen is miraculous. Sometimes I sit and I reflect on it and realise that God is amazing."

Mabika, who studied drama at the University of Zululand, says as much as she understood the character, it took her time to master it.

"I have created certain language for Thobile. She is quite vulgar because she is a sensitive person. I have chosen certain words that she uses whenever she is angry."

Currently, Thobile is in a relationship with Mastermind, who is also a notorious player. He frustrates her with Mamsy.

"Thobile is a clingy person, and in this season the viewers will see her reveal her psychotic levels."

Apart from her rising acting talent, Mabika is ready to pursue her music career. She says she needed time to think about what she wants to put out there.

"I needed to know that I am ready to sustain it once it is out there. I needed to understand and digest where I am, and where I should be."

When Mabika was growing up, she always believed she would be a music star. But she started thinking about acting after her father told her the music industry was not stable.

As a drama student, she studied visual arts, dance and piano. She also plays the clarinet.

"I have always wanted to be a musician, I can't remember thinking of doing something else." Look at her now.