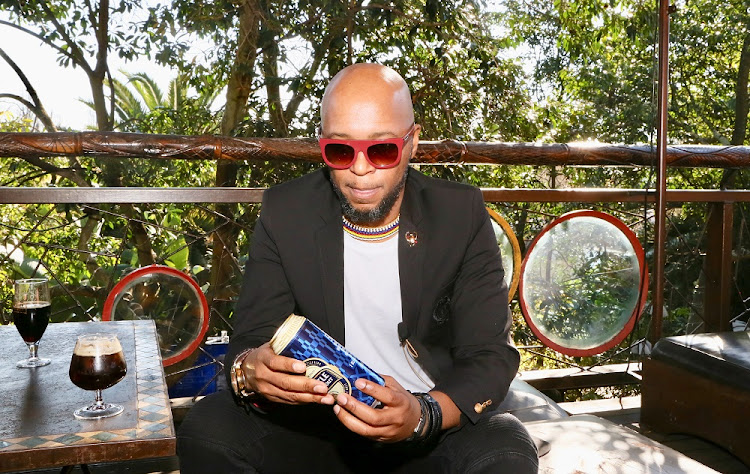 Stoan Seate marvel over a beer can with his clan praise at the launch of Castle Milk Stout’s #GetItBack campaign in Johannesburg
Image: SUPPLIED

In a move reminiscent of the American Pepsi campaign which saw the popular soft drink company launching the controversial ‘Kendal Jenner ad’ that many saw as a ‘hijacking of social issues’ and taking advantage of the wave anti police brutality protests which had swept over the country – local beer brand Castle milk stout has decided to join the current Afro futurism movement.

Young black people all over the world are now taking charge and reclaiming their identity through art, culture, and political resistance. The current discussion on land ownership in the country is front and centre of the debate.

Speaking at the event launch held in Johannesburg, Vice President of Ab InBev Andrea Quaye said their intention was not to spread a message that one can ‘get back’ to their roots through alcohol but rather to spark conversations.

“We have brands and a brand is a memory in somebody’s mind. So with Milk Stout being the first brand to be brewed in Africa in the 1920s, we have always engaged with culture. We are not saying with alcohol you can get it back but we’re saying with a brand that stands for culture, we can incite that conversation, we can put that conversation out there and we can help people think about it and have conversations.”

As part of the campaign, the alcohol brand will launch a website in June called Clanopedia where people will input their clan names and clan praises. These will then be engraved on 500ml limited-edition beer cans with African blended patterns.

So a Mr Khumalo would be able to drink from a can carrying his clan name of Mtungwa.

“Our history in Africa is an oral history. There’s no repository where everything is kept so what we want to facilitate that. So with social media and technology, people curate information and I think it’s important that we create a space where people can put their clan names there so that if somebody else doesn’t know their clan name and wants to learn a little bit more they can actually go there,” Quaye said.

The move was welcomed by popular traditional healer Gogo Moyo who believes that the focus should be on the message rather than the brand behind it.

Although the brand shies away from directly linking the campaign to the land distribution without compensation topic, Zolani Mkiva, the Imbongi to former President Nelson Mandela and the Secretary General of Contralesa is of the view that African heritage and land ownership cannot be separated.

“They must compensate us for the years wherein this land was in their hands and they made profits,” said Mkhiva.

“They must return those profits which have been made over the 300 years when they held the title deeds of that land and used it commercially to benefit themselves and their families.”