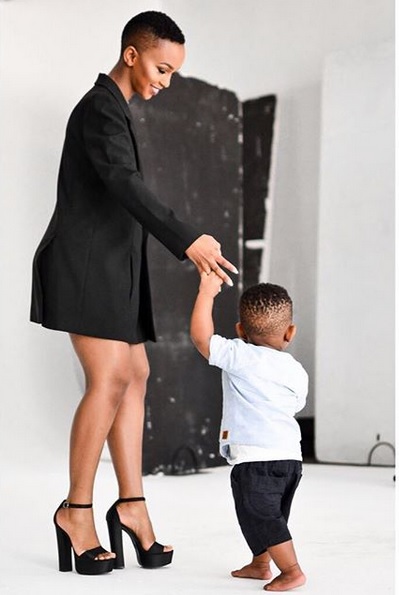 There is Nandi Madida the celebrity fashion designer, actress, musician and TV presenter, who is getting ready to launch her new reality fashion TV show Made in Africa.

Then there is Madida the devoted wife and mother to one-year-six-month-old son Shaka.

I got to know the latter a little better during our chat over the phone on Wednesday night - the odd hour of 9.30pm, to be exact.

It's a dark, cold winter night and she has just put Shaka to sleep. But as they say in showbiz, the show must go on.

"Because I'm on the phone with you my son just woke up, which means I'm going to have to make him sleep again," she says.

"When he wakes up he's so excited about life. With motherhood, I've learned to take things as they come. There is no time to be anxious. I love that because it prepares you for anything - whether it's with a production or showcasing at fashion week."

"He [Bantwini] is my best friend. He's my biggest support structure. I'm fortunate to have that," she gushes.

"I love married life. It's very important to just keep working at it. I'm really in love, but in a realistic manner."

In February, her clothing brand Colour - in collaboration with emerging designer Josh Patron - made history after showcasing a smashing collection at New York Fashion Week (NYFW).

She hints coyly to Time Out about who she will next collaborate with for Colour's new collection, set to hit the runway once again at NYFW later in the year.

"I'm collaborating with - and I'm going to be announcing it at the end of the month - a gentleman that is currently working with [British supermodel] Naomi Campbell," she teases.

"He just dressed her recently. I can't reveal his name yet but I'm going to be collaborating with him for New York Fashion Week.

"I'm so excited. I can't wait for you guys to see that collection.

"He put that outfit on me first. Naomi also liked it. So that is a hint."

But all clues point to Senegalese-born fashion designer Omar Salam.

Last month, Campbell was spotted out and about in the same look.

Over the last year, there has been a noticeable shift in Madida's career, with less TV and music gigs and more fashion work. She insists that it has not been a conscious move on her part.

"It's an organic movement that my name is becoming more synonymous with fashion, more than deliberate. The timing is just right," she says.

On Wednesday, May 30, Madida will make her debut as the host and co-producer of Made in Africa on BET Africa. Billed as a first on the continent, the new reality TV fashion show will see 18 young and emerging designers across Africa duke it out week after week to be crowned the best in the business.

"I have been offered a couple of shows similar to Made in Africa, but the main reason I chose this was because it was celebrating the continent first," she points out.

"What a time to be alive, where we can celebrate African fashion designers. We have had many fashion shows coming through, but people have been complaining on the continent that we are not celebrating the continent enough. So here is the answer to that and a gift to the continent, in a time where people are celebrating Black Panther and Afrofuturism."

It has been a long while since the release of hit songs such as Skhanda Love with rapper K.O and Fly Away with house maestro DJ Kent.

Madida reveals that after a long wait, fans should expect new music from her next month.

"As of next month I will be back, musically. We hinted at collaborations, [but] I'm going to be releasing my own stuff too," she says.