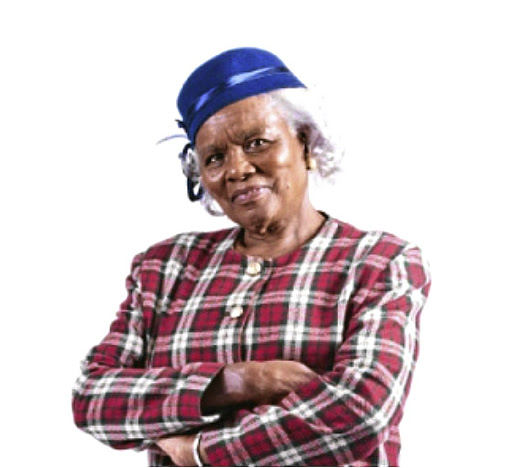 Ivy Nkutha was robbed of her wheels.

Generations: The Legacy actress Ivy Nkutha is still reeling from shock after her car was stolen just in front of the SABC's Henley Studios in Auckland Park, Johannesburg.

Nkutha who plays the role of Gog' Flo on the SABC1 soapie, had her car stolen while she was busy shooting on Monday.

The seasoned actress said she could not believe her eyes when she found another car where she had parked hers to discover that thieves had made off with her grey Nissan Hard Body.

"I arrived at the SABC around 11.40am and finished at 4pm. When I got outside, I looked where I had parked my car and it was nowhere to be found," she said. "I was shocked and I stood there for a minute in disbelief. I was so confused that I even looked underneath other cars."

Nkutha has opened a case at the Brixton Police station. She said police had even promised to look at the SABC surveillance cameras.

The 75-year-old said, as much as she was shocked by the incident, she knew that many people have been victims like her.

"I was worried about how I would get home but I have actually put everything to God."

Nkutha was born and raised in Alexandra. She studied nursing at the St Thomas Training Institution.

She then joined a dental care school as a dental educator, travelling across the country to educate butchers on how to clean their meat for the good health of their customers' teeth.

She has previously acted in shows such as Soul City, Muvhango, Isidingo, City Ses'La and later Zabalaza.

SABC acting spokeswoman Mmoni Seapolelo said: "All SABC permanent staff members and independent contractors including the actors are provided with an opportunity to park their cars within SABC secured parking spaces which are inside our premises.

"We have also allocated security personnel to guard Henley Street for the cars that park there. In this instance, the car that is referred to was not parked at Henley but at Ditton Street."

Police spokesman Captain Kay Makhubela confirmed that a case has been opened at the Brixton police station but it was yet to be registered.

Noni Gasa back on TV

Style icon to decide who wins the accolades.
Entertainment
4 years ago
Next Article