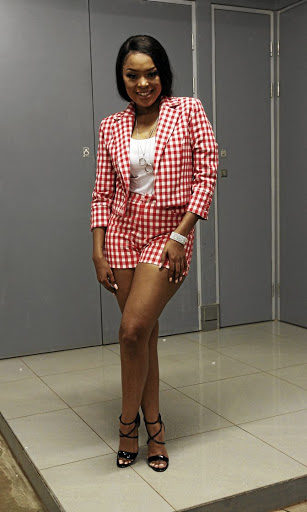 Speaking to Sowetan shortly after news of her departure broke yesterday, Kganyago said she believed her time on the Friday night music show was over.

"I am happy about the fact that I am now giving someone else the opportunity to experience and use the platform that I have used before," she said.

"There is a certain type of shift that is happening in my life right now. I am rebranding and also trying to look at other avenues, but most importantly the aim was never to stay too long at Live Amp.

"This is actually a very great time to look at other options if there is any, and merely to give some of my businesses attention."

Kganyago joined DJ Warras as presenter in April 2016 and enjoyed the attention of more than four million viewers of the popular weekly show.

The sexy starlet, who is fresh from winning a best presenter award at the South African Film and Television Awards last month for her contribution on the show, said she will forever be indebted to a production company Urban Brew and the SABC for giving her the opportunity.

In a statement released yesterday, Live Amp series producer Akhumzi Jezile said: "It was an absolute pleasure watching Lerato grow with the Live Amp brand. Her love and passion for entertainment kept her grounded throughout her stay. She will no doubt make a success of anything she chooses to take on."

The show, currently in season 22,has become a huge part of popular culture in SA, showcasing local hits and providing a platform for new and accomplished artists.

Zandile Nkonyeni, head of public relations for SABC TV, said Kganyago's commitment to the show was evident when she won an award recently.

"We are grateful that as a public broadcaster we have contributed immensely in her television career and are proud to have had Lerato as part of the Live Amp family. We wish her well and we would like to thank her for her commitment to Live Amp and SABC1 over the years."

Kganyago's last show will be on May 18.