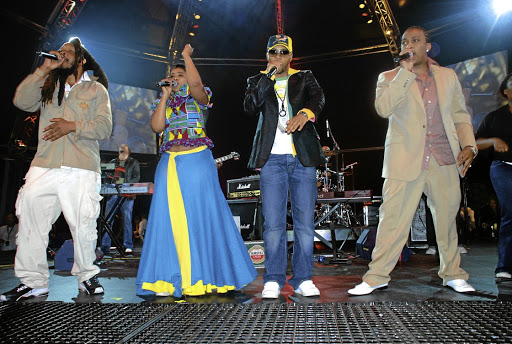 Bongo Maffin has come of age.

They burst on the music scene in the 1990s as wide-eyed youngsters and recorded some of the most popular Afro-pop hits of a generation.

On Wednesday they rewrote their history as they inked a partnership deal with Kalawa Jazmee, the music label that gave them fame and acclaim. They have been working on the deal since June last year.

Speaking on behalf of the band, Seate explained that the deal meant that the two parties were jointly responsible for their projects in recording, marketing, imaging and so on.

"We have more of a creative and decision-making role on all aspects of production. It's really exciting," he said.

"It's like a child growing up in a household and becoming a partner of the parents, contributing to the future of the household. We are happy knowing that we contributed to the vitality of Kalawa going forward."

Bongo Maffin is in studio for the first time since 2005, when they released
Reconstruction and they herald their return with the release of their first single, Bongo Harare.

"We are hoping to release [the album] before winter sets in. We are still in the production stages. It's about the joy of the journey of Bongo Maffin."

He said the song, written by all four members, reflected their interpretation of how far they have come.

"Bongo Maffin was born a day after the democratic changes happened in SA. After a generation we find ourselves at another crossroad. Even in Zimbabwe there are big changes happening," Seate said.

He said their album release was slated to coincide with a six-part documentary series to be broadcast on a local channel telling the story of Bongo Maffin, as well as the making of the new album.

"We are back together. We are in business. The commitment is deeper than in the past. Many other things have happened in the past and we have dealt with them. We share kids between us, so it's important to be mature."

Seate and Mazwai have a daughter together.

He said they were happy to have erstwhile member Speedy back in the fold.

"Speedy has a strong personality. I've come to understand him as his older brother. He's got his abrasive side, but he's kind-hearted and a hard worker. He's dedicated and committed to the process. He's a glue that binds us together."

"It's important for them to create a legacy for themselves... It's a unique and special element for people to set their differences aside and make things work.

"It's us and them together and we hope God blesses this partnership."