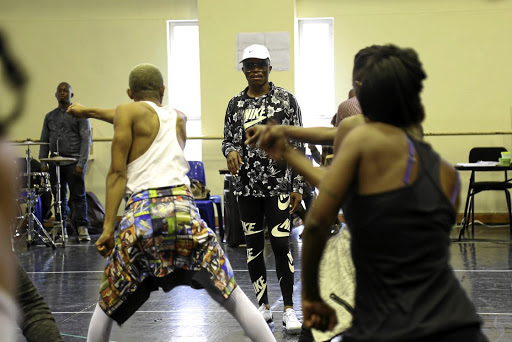 Somizi Mhlongo choreographing Gibson Kente's classic musical 'How Long?', which is being directed by Duma Ndlovu at The Playhouse in Durban.
Image: JACKIE CLAUSEN

If there's anybody Somizi Mhlongo has to thank for his gift of life, it may be inimitable playwright Gibson Kente.

It was during one of Kente's many productions that Somizi's actor parents Mary Twala and Ndaba Mhlongo's romance blossomed and he was conceived.

Mhlongo, the choreographer of Kente's musical drama How Long? told the media at the launch of the historic production in Durban yesterday that he had "come full circle".

How Long?, directed by Muvhango creator Duma Ndlovu, is set to return to the stage at The Playhouse Company next month, after it was banned 45 years ago. The musical with political undertones is based on the death of Khulu, a helpless grandmother who was a victim of apartheid police brutality.

Kente, who died in 2004, wrote the play as a response to pressure from Black Consciousness movements that cultural work needed to reflect the conditions of the oppressed.

Somizi puts a ring on it in Paris

Somizi Mhlongo pulled out all the stops in his proposal to bae Mohale Motaung.
Shwashwi
4 years ago

The play was banned in 1973 and Kente imprisoned after it took flight in township halls.

Speaking at the launch, Somizi said he was "relieved".

"Some people may think theatre in South Africa is dying. It hasn't died, or is even attempting to be in a coma. We just need bums on seats.

"When I was asked to choreograph I was really honoured. This is where I was conceived. I have come full circle. For me it's not just a pay cheque. It's in my blood because of my parents, I had no choice really."

He is hoping that The Playhouse will be inundated with bookings.

Ndlovu sees the piece as the "dawn of a new era in South African black theatre".

Ndlovu said the inclusion of an orchestra and hints of ballet in the play, will make for "groundbreaking theatre".

The cast includes well-known local stars Thembi Mtshali, Phindile Gwala and Khaya Dladla. The show runs from May 5 to 27.

After months of being a member of the #Hidebae movement, Somizi has finally let us see his partner's face.
Pic of The Day
4 years ago
Next Article