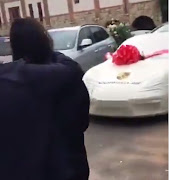 ANC elections chief Fikile Mbalula shared the video in a tweet on Friday‚ stirring up a lively debate when he asked: “What do you think. Would you buy your child a Porsche for a birthday ? Maybe for excelling getting distinctions?”

In the video a man is seen covering the eyes of a school pupil carrying a bouquet of red flowers as they walk passed parked cars‚ watched by classmates. “I’m going to faint‚ wait‚ wait‚” she says just before he reveals a covered white Porsche with Gauteng registration plates.

“Happy birthday‚” he says and the two embrace‚ with the tearful daughter saying: “Thank you dad”.

Some claimed‚ incorrectly‚ on social media that the man was Eskom chairman Jabu Mabuza. However‚ this publication has independently confirmed that the man is Lebohang Khitsane‚ the founder and CEO of Bataung Memorial Tombstones – whose work in commemorating the dead has been recognised across the continent and featured on the BBC.

Khitsane declined to comment on the widely shared video clip‚ saying that it was a private matter.

His wife‚ Maria‚ posted in a public Facebook message on Thursday: “As your parents all we want to say is that we are really proud of the way you have grown into a fine young woman. Keep going‚ keep reaching new heights – just remember that You may have turned eighteen but always remember that we will never stop nagging and telling you what to do – simply because we love you. Happy 18th birthday.”

Bataung Memorial Tombstones‚ according to its website‚ has over the years attracted a vast and loyal clientele across southern Africa.

The Sunday Times reported in January that Khitsane started in the tombstone industry about 13 years ago. His first celebrity graveyard artwork was of Morewa in 2005‚ followed by one for actress Lindiwe Chibi‚ who played Doobsie in Muvhango.

Khitsane said 70% of his clients were "ordinary citizens" whose families were tired of "boring" tombstones. He has made statues for Shangaan disco king and reality-TV star Papa Penny‚ Archbishop Emeritus Desmond Tutu and former president Thabo Mbeki.

Khitsane took flak over a large statue of the late Robbie Malinga and the tombstone was redesigned after a flurry of nasty comments on social media.

"For me‚ this is God's calling. People appreciate beautiful tombstones. Each and every tombstone for me is a challenge. I have to make sure that what we create reflects the life of the deceased‚" he told the Sunday Times.