Cata-Lust for change in hip-hop game 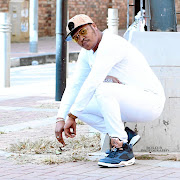 It's time for Cata-Lust. The Johannesburg-born and based rapper, whose real name is Thabiso Lawrence, is making all the right noises and moves with his single Oh My Gawd.

If he's not being praised for his lyrical prowess, then it's for the energy he exudes.

The music video has whipped people into a frenzy. Shot at The Rock Raceway in Brakpan, east of Johannesburg, it reflects his enthusiasm for motor sport, hip-hop and dance.

Cata-Lust is a sound engineer and has been writing verses for the longest time, since he was 11, in fact, mimicking 90s rap stars Kriss Kross, Busta Rhymes and LL Cool J.

He describes his flow and rap style as "polysyllable or multiple-syllable", inspired by rap heavyweights such as Common, Mos Def and Eminem.

"Anybody can rap, but not everybody is an emcee... rapping on concepts and topics that inspire people to be the best they can be and also being a social commentator."

Cata-Lust is also an entrepreneur with his own record label, TitusTrack Productions. He counts Idols SA presenter and Kaya FM DJ Proverb, with whom he recorded We Live, as a friend.

Cata-Lust ventured into rap in 2004 as part of a group called Free Masons, with partnerships and collaborations leading to the formation of duo TitusTrack and eventually the group Sounds Intense.

Cata-Lust went solo in 2012, and the rapper is finally hitting the big time this year with the release of his new album, Before the Press.