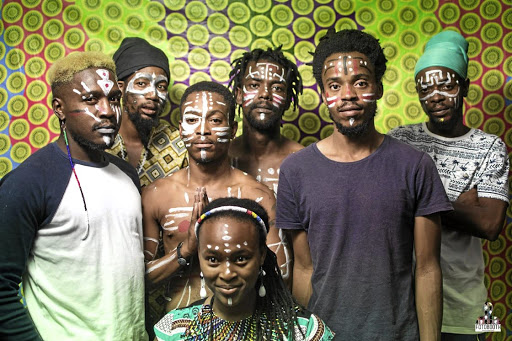 For upcoming band The Sun-Xa Experiment, healing the nation through spiritual music is their first priority.

The Sun-Xa - "the sun is up" in Khoisan language - was formed two years ago and is made up of six members under tour manager Lebogang More.

Simphiwe Watte (percussion), Tebogo Mkhize (acoustic guitar), Sphiwe Mgidi (drums), Lerato Seitei (electric guitar), Musa Zwane (bassist) and Buyisiwe Njoko (vocals) had known each other for a while through jam sessions before they decided to start the band in 2014.

Founder Mkhize says it was through musical connection that the band finally decided to make everything official in 2016 and started performing together. "It's the energy that brought it all together and we kept it moving from there.

"We were all doing different things at the time but we linked up and started playing songs and the energy was too much."

The band are originally from Soweto, and Mkhize says even though there is no trained spiritual healer in the group, their sound is ancestral and is meant to bring healing.

They recently launched their debut LP Vynal in Durban, with songs like Kushobani and Wafa Umuntu.

Njoko says: "Our music is beyond entertaining, it is healing, hence the song Wafa Umuntu. We are educa-
ting people not to just focus on their problems, we need a common ground as human beings and to care more about each other as well."

Every Saturday a group of about 150 children, some as young as eight, descend on Nkanyezi Stimulation Centre in Soweto.
Entertainment
3 years ago
Next Article