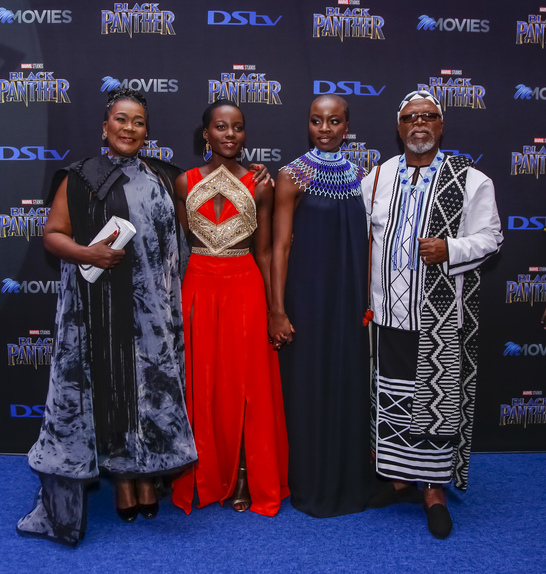 Getting the Xhosa pronunciation right, especially the tongue-twister click, was a challenge for the Hollywood cast of Black Panther.

A-listers Lupita Nyong'o and Danai Gurira visited South Africa at the weekend to promote the Marvel film that opened on Friday.

They revealed that the movie's SA stars, Connie Chiume, Atandwa and John Kani, had assisted them a lot on set.

Xhosa is the official language of Wakanda, the fictional East African nation that is home to the characters and titular superhero.

"Atandwa was really our go-to guy on set. All songs, translations and pronunciations, Atandwa was our person," Nyong'o said.

"Obviously, the clicks are no joke. She [Gurira] had experience, having been here for a semester, but some of us did not.

"It was quite a challenge because the Xhosa language is one of the hardest languages on the planet."

Gurira added: "I love it for that. I love how specific, unique and beautiful it is. That's what we have always wanted to do, delve into African specificity as artists."

Nyong'o continued: "So often we get to watch American movies that have [English] subtitles for German, Russian, French and all that.

"So rarely are people asked to listen to an African language and read the subtitles for it. The fact that the film is working and resonating proves positive that our languages resonate as well."

Kani, 75, echoed what the actresses said. He said aside from starring in the film, it had also been a pleasure to serve as a "cultural consultant" on the set of the Ryan Coogler-directed movie.

"We played a critical role. We might not have been in every scene but [we ensured] the authenticity of the African culture," Kani said.

"I was language and cultural consultant. Connie was used by many people like Angela Bassett and Lupita Nyong'o asking: 'Do you think this would happen?'

"The director consulted all the time. When I left, my son Atandwa took over from me. They allowed him to stay beyond his time in the movie and continue until the movie was finished to consult."

Chiume, 65, who is celebrating her 40th anniversary as a working actress, urged all South Africans to see the inspirational movie.

"I'm so inspired by this movement that's taking place in America, where they are encouraging young kids to see the movie. The theme of it says: 'A hero that looks like me'," she said.

Lupita Nyong'o, Danai Gurira, Letitia Wright and Angela Bassett who star in the movie Black Panther cover the March edition of Essence magazine. Male ...
Pic of The Day
4 years ago
Next Article