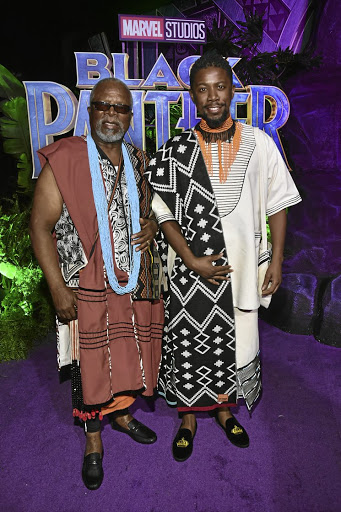 John Kani and his son Atandwa at the world premiere of the Black Panther. / Alberto E. Rodriguez / Getty Images

"When I walked into the studios, Marvel was standing there and they all looked back and he said 'hold it guys we are visited by royalty, let me introduce to you Dr John Kani, a Tony award winner, OBE award winner, streets and theatres are named after him'," John Kani brags to me.

We are sitting in the heart of it all, a place that reminds him of his journey, the Market Theatre. The walls are covered with his images in numerous stage productions and, across from us, is the main theatre, the John Kani Theatre.

"There isn't a town or little place that I haven't performed in. I have been all around and then of course you could follow my footsteps around the world, but there seems to be a circle that ends me here," says Kani.

Although the 74-year-old has retired from active participation at the Market Theatre, he remains its ambassador.

In a fortnight we will see him take on the role of Kind T'Chaka (Black Panther's father) in superhero movie, Black Panther. Also featured in the movie is his son Atandwa and veteran actress Connie Chiume.

Designer relates how she dressed the cast
Entertainment
4 years ago

The South African contingent sparkled on the red carpet of the Black Panther world premiere in Hollywood.

"Sometimes we are not aware of how important the South African art and entertainment industry is. We are so respected abroad.

"Because of South Africa's western influences in its make-up, you find that South African artists merge or assimilate much faster on accents and everything within the community.

Although the film has a star-studded Hollywood cast, Kani explains that actors such as Scarlett Johansson often flock to him in amazement because they studied his work at the beginning of their careers.

"I often hear 'I studied you at Yale' or 'when I was in a small company back in LA we saw your play and that was when I knew I wanted to become an actor'," Kani explains, not bad for a career spanning more than 50 years.

Kani suggested that Xhosa be one of the official languages for Wakanda (the land in which Black Panther comes from). "I am a very arrogant native and arrogance for me is not a bad word. It's just that I am confident so whatever role I take I come with my head held high."

He explains that the process and preparation of finding the character is still the most important part for him and that his mindset at the time was in a state of African leaders such as King Shaka.

"I study the writer, once you understand the issues that caused the writer to write this or the environment he was in I am able to serve the writer and serve the world."