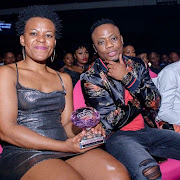 Record label boss DJ Tira has stepped in to put out the flames‚ after Zodwa Wabantu received backlash on social media over her “vulgar” language.

Zodwa landed in hot water after a video of her giving a speech over the festive season went viral.

In the video‚ Zodwa told women that they should not shy away from using female persuasion.

After being inundated with complaints‚ Tira called a meeting with Zodwa to discuss a way forward.

“We’ve just had a brief meeting about a way forward because we’ve heard your complaints‚ especially on social media‚ that Zodwa’s language is too ‘strong’.”

Tira said he hoped that Zodwa would change the way she speaks and rather speak to “inspire” people.

“In 2018‚ Zodwa Wabantu will change her language but I won’t change‚ you’ll still get the same Zodwa‚ she ain’t going nowhere. You are going to see her on your small screens‚ thank you so much for the love and support. I know I express myself differently but thank you so much‚” Zodwa said.

Watch their meeting below:

Although Zodwa has never been shy to share her “unfiltered” opinions she seemed remorseful in the video.