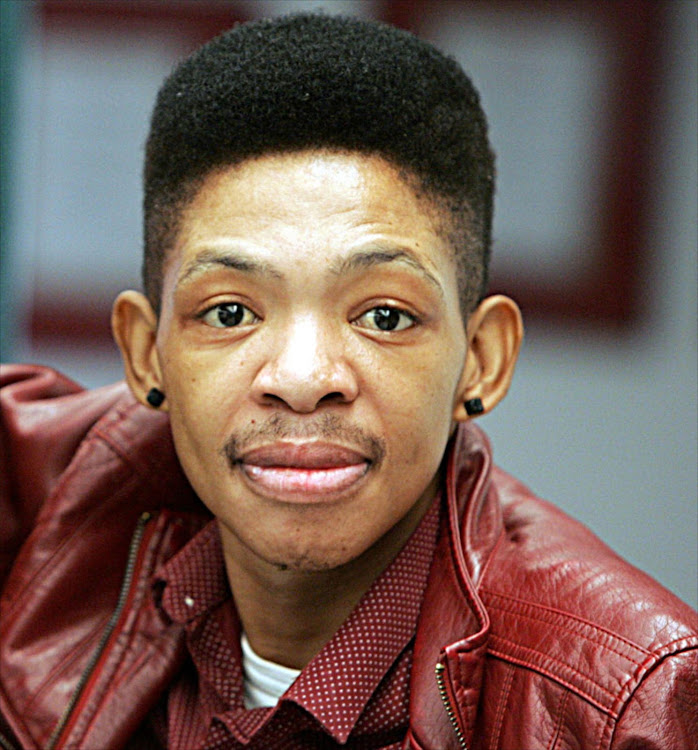 In January 2017 South Africa lost up and coming gospel star‚ Lundi Tyamara. He had been in and out of hospital for months‚ battling abdominal tuberculosis and liver complications.

Tiso Blackstar's Jessica Levitt was with his family and friends as they gathered at his home to share stories about Lundi. Some were funny‚ some were sad‚ but most were heart-warming.

Three schoolgirls are late‚ running towards their taxi in the quite street in Naturena. They're giggling and don't even take notice of two men setting up portable toilets outside the modest beige house. They skip over the hose pipe that's running from a neighbour's house across the street into the toilets. The men smile and the girls wave.

It's just before 9am. Exactly 8 hours and 20 minutes since Lundi Tyamara's family got the call that he had died.

A neighbour wearing a nightie‚ grey gown and cream slippers is standing outside directing the use of the hose pipe.

I'm the first person there but the neighbour‚ who asked not to have her name mentioned‚ said she was expecting journalists.

"We put a message on the community forum informing the neighbours that the road would be busy... Lundi is gone now. He fought‚ but he has gone‚" she says.

The family home that Lundi was staying at since he fell ill is silent‚ with no signs of anybody being home.

A war over the late gospel star Lundi Tyamara's estate has broken out between his two baby mamas and his former boss Tshepo Nzimande. The baby mamas ...
News
4 years ago

"Anele has gone out. He had to take Lundi's sister to hospital. She has asthma and had an attack after hearing of his death‚" says another neighbour.

He's talking about Anele Hlazo‚ Lundi's manager and friend who has been keeping the media updated on the health of the gospel star ever since it emerged at the beginning of January that he was severely ill. The award-winning singer first fell ill in November last year after returning from a visit to China.  He was in and out of hospital and in January the news broke publically.

"This thing has been going on for so long. It's been a battle. We didn't think he'd make it through Christmas‚" says a family member.

Anele told the press that Lundi had been diagnosed with stomach TB and liver complications. His health was precarious and every week social media 'killed' him‚ but he pushed on and it was only on 22 January that his condition truly worsened and he was admitted to ICU and put on life support. He died five days later.

An hour later and I am still the only journalist at the house. A neighbour asks me to go into her home.

"Journalists are used to waiting in the car. I'll be fine‚" I say.

"No. You will come in and have tea‚" she replies and starts walking away.

I enter her modest house to the sounds of Lundi's Mphefumlo Wami.

"It's going to be a long day‚" she says with a sigh as she sits down.

"You know Lundi loved himself‚ hey. He only listened to his own music. We'd be driving in the car and if you didn't have his CD‚ he'd have a cable and hook it up to his phone‚" says the family member with a smile.

I realise my phone needs charging and excuse myself. Half an hour later‚ and still the only person in the street‚ there's activity at Lundi's house.

A family member walks across the road to chat to the neighbour who has also come out.

"You know Lundi loved himself‚ hey. He only listened to his own music. We'd be driving in the car and if you didn't have his CD‚ he'd have a cable and hook it up to his phone‚" says the family member with a smile.

She's also wearing a nightie‚ covered by a jersey with blue and white stripes.

"I'm sorry I didn't come out earlier to meet you. I was sleeping. I haven't slept this whole week."

The wind stops blowing and the sun comes out. Her eyes well up and her lip is quivering.

"This last week... I wouldn't wish anyone to see him. At first he was okay. Joking. 'Why are you bringing me flowers? Do you want me to go‚' he said. But then he got so skinny and weak. That picture (a leaked picture of a frail Lundi in hospital went viral ) wasn't even as bad as it got. Lundi is so small anyway‚ but he just dropped. And then Mboro...."

She starts shaking her head.

Well-known Pastor Mboro told the press that he had visited Lundi in hospital last week and had offered to pay for his medical expenses because he was not "satisfied" with the service at the Edenvale facility.

These comments angered the family.

"There was nothing wrong with the hospital. It would have been unwise to move him in his condition. But that hospital was fine. People just do things for the attention‚" says another family member.

There's long pauses between the conversations. It's around 1pm by now and still zero activity at the house. But the sentiment is repeated.

This is a family in shock. They knew Lundi was ill‚ but because he had fought for so long‚ they were hopeful that he would survive. A prayer service was held for him on the evening before his death and his family believe he held on for this.

"Something happened last night. I felt him with me. I knew that something big was about to happen. At that prayer service I knew that Lundi was either going to die soon or suddenly get well. I felt it. We all felt it. His presence was there. It's a feeling I still can't shake. Perhaps it was his farewell..."

She's shivering now and I insist that they don't have to wait with me outside. That this is their family member's funeral and they have stuff to plan. That I'm a journalist and am used to waiting in my car.

"Just come inside. We're going to start praying. Are you sure you don't want tea?"

The first set of visitors arrive at around 2pm. A bakkie is next‚ filled with chairs and another car is offloading packets of onions and potatoes.

He's got dark circles under his eyes and apologises for his state.

"I haven't even brushed my teeth. Can I come to you now? I just have to speak to the funeral guys. I just saw Lundi's body.... I.... just... saw...‚" he turns his head and walks away before the sentence is finished.

Lundi's brother is biting back tears as he explains that he saw his brother the day before he died at 3:30pm for the last time.

"I never expected it. May he rest in peace‚" he says‚ biting his lip and looking to the floor.

We're in the garage and suddenly there's a hive of activity.

Women are cleaning pots and peeling carrots while guests walk out the house with plates full of chicken and rice.

Lundi was known as the bad boy of gospel. He openly admitted to having a drug and alcohol problem and his character on stage was something his critics didn't approve of.

At 38 years old Lungi had been the tabloid darling and target.

Yet no one here cares about his problems. They've been with Lundi through it all and know him past his demons.

He admits that he feels he has to be strong to make the arragements. Lundi is survived by three siblings but Anele became his 'brother' after the two started working together‚ and Anele produced his music.

There's a long pause and he gathers his thoughts.

"We were recently in the UK but it was like a holiday for us. There were two rooms booked but we wanted one room. We just wanted to be together. You can imagine‚ going so far‚ seeing the world‚ going to do something that you love. Gone are those days. He is the one who has the voice. I only produce the voice."

His legacy to his immediate family‚ friends and neighbours was that he was humble. He hung up their washing. Walked to the local spaza. Loved his birthday and getting spoilt on his special day and was always happy to fool around and take funny pictures.

But perhaps‚ bigger than that‚ was his ability to make people believe in themselves.

"Lundi is older than me. In age. In the industry. But I was his manager and he respected me. Everything that I said to him mattered. I was the one that was learning‚ but Lundi didn't see it like that. He believed in me and my skills. He always surprised me. He was a happy soul that spread that happiness‚" says Anele.

The say death cannot be heard but it is certainly seen and felt. I saw a community uniting in pain and sorrow to remember their friend. I felt those happy memories and was part of Lundi's life as those he loved so dearly shared him with me. And on that day I heard his voice echo through the streets and as I drove away‚ I realised that in death‚ Lundi had made me a proud African. For this is what Lundi was. Proud.

I am an African. I owe my being to the hills and the valleys‚ the mountains and the glades‚ the rivers‚ the deserts‚ the trees‚ the flowers‚ the seas and the ever-changing

Robbie Malinga planned to work on a new album with Dr Malinga in 2018.
Entertainment
4 years ago

God knows how heartbroken I am: Kelly Khumalo on Robbie Malinga's death

President Jacob Zuma had described the death of veteran musician Robbie Malinga as a “huge loss” for South Africa.
Entertainment
4 years ago

Robbie Malinga's family and friends have been left shocked by his death.
Entertainment
4 years ago

Despite being in and out of hospital this year‚ those close to Robbie Malinga said his death on Christmas day was still a shock.
Entertainment
4 years ago
Next Article