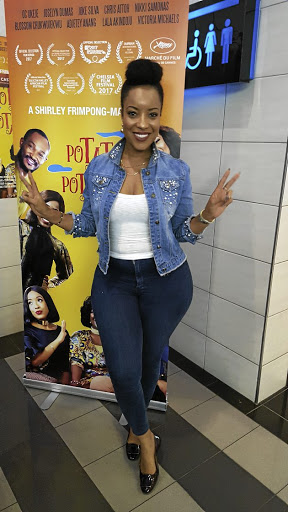 I meet Joselyn Dumas the morning after the night before. Fresh as a daisy, you wouldn't say she had just jetted into Johannesburg a few minutes earlier from Durban.

She doesn't show any signs of wild partying from the night before. The beautiful and gracious Ghanaian screen goddess confides in me that the truth is that she partied until 5am at the hot and trendy Chairman, in the middle of Durbs.

So in love with the city is Dumas that she jokes that she might move there - either for the beaches or the laid-back nature of it. The fact that her surname can easily be confused with the Zulu, Duma, is even more convenient. Dumas is in town to promote her newest film Potato Potahto, a side-splitting comedy about divorce.

She stars as Lulu, alongside Nollywood A-lister OC Ukeje (who plays Tony), as a recently divorced couple sharing their mansion.

They partition the house and some areas are no-go zones for the other, resulting in ridiculous encounters and petty arguments.

Actor Jim Iyke has described the Nigerian film industry’s focus on witchcraft as its way of telling stories that are based on the “good vs evil”.
Entertainment
4 years ago

Things unravel as they face up to the truths about what led to their divorce just two years after marriage.

The overall production can be taken to the world to showcase the stunning houses, snazzy wheels and impeccable style and clothes Africans possess - and not the usual fare of woe, war and gore.

"The reaction has been great. The 'ooh's' and 'ahh's' and laughter tell you that the audience get it, the sublime and the sarcastic jokes. They pay attention to the dialogue.

"We tackle divorce in a funny way. This is a a universal theme that resonates."

It has enough shine and glamour to appeal to a broad audience.
Entertainment
4 years ago

Dumas is happy that while the movie was filmed entirely in Accra, it reflects a progressive Africa. It's her wish for more collaborations across the continent to tell more stories.

Back home, Dumas is a big-deal talk show host of Keeping It Real with JoselynDumas, where she tackles real-life issues facing women such as single motherhood, infidelity, sexuality and what to do on your first date.

She's a mother to a 13-year-old daughter and attends PTA meetings, she says modestly.

She has over one million followers on Instagram and is a regular magazine cover girl.

Closest to her heart are children's issues and causes.

Nakhane Mahlakahlaka (formerly Touré) is still on a high after Inxeba's (The Wound's) selection as South Africa's entry for Best Foreign Language ...
Entertainment
4 years ago

"I love children. I'm surprised I only have one," she laughs. "I'm hoping to mentor younger girls and validate them.

"They need not sell their souls. Nothing is more liberating as a woman [than] to pay your way and be independent to spend your money."

She believes that the illusion of a perfect life as reflected on social media is to blame.

"We need to be more honest and stop with smokes and mirrors. You need to put in the hard work. I drove a Sentra, then a Toyota before landing a Range Rover Evoque endorsement deal, because I realised that you had to crawl before walking," she adds.

Dumas studied law in the US and worked as paralegal before coming home to pursue a career in entertainment.

Her grandmother taught performance art at the University of Ghana and hosted a show on a local TV channel.

Dumas continues to dream big - this time, to host a pan-African talk show on the scale of Oprah Winfrey and Ellen DeGeneres.