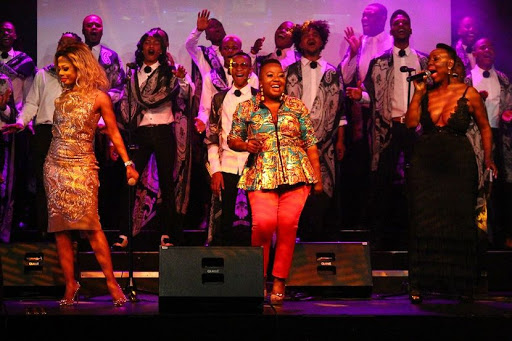 Kelly Khumalo sings during All Boys Gay Choir which was perfoming for an audience at Bassline in Newton on Friday night. The All Boys Gay choir is the first choir which is only gays and they intend to make a mark in South Africa and the world. PICTURE: KABELO MOKOENA

MGC performed at the Night of Divas at the Bassline in Newtown. The choir shared the stage with Kelly Khumalo, Brenda Mtambo, Wonder Baloyi and Amstel.

Thami Kotlolo of the Thami Dish Foundation which organised the event said: "We staged this event to celebrate Pride Month. The event is a build-up to the annual feather awards that will take place in a few weeks time."

MGC members are mentored and vocally trained by Mtambo who said it took them two weeks to prepare for Friday's performance.

Mtambo said the songs were carefully chosen. "The songs that we chose push for oneness and are empowering because of how LGBTI [Lesbian, Gay, Bisexual, Transgender and Intersex] people are treated in our communities. Take songs such as Born This Way by Lady Gaga and Free by Boom Shaka, they make a bold statement," Mtambo said.

Khumalo, Mtambo and Baloyi joined the choir on stage to sing Michael Jackson's Earth Song . The performance left some members of the audience in tears.

Choir member Siya Mpanza said the group did not expect a good turnout.

"We had fun on that stage and the audience had fun, too. The response we got was overwhelming," said Mpanza.