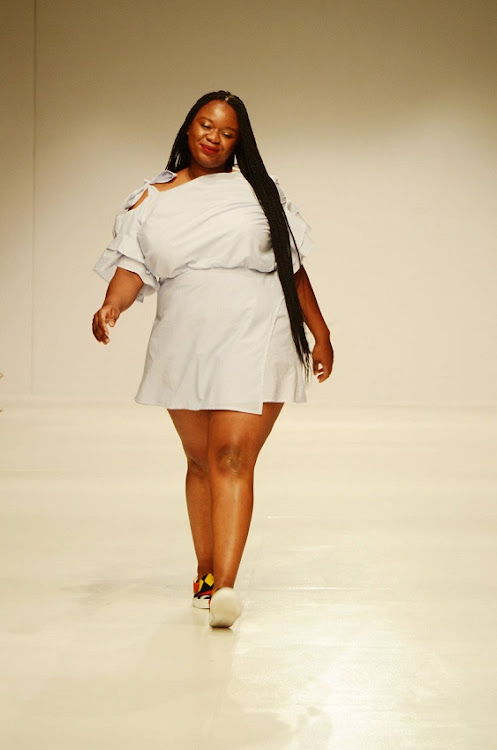 What was meant to be a moment of triumph for plus size fashion at SA Fashion Week (SAFW) has turned out be a sordid episode of abuse and ridicule for model and photographer Lesego Legobane, also known as Thick Leeyonce.

After modelling at the event on Tuesday night in Sandton, Thick Leeyonce shared that she cried so hard at the social media hate that her mother had to help her clean up the vomit she spewed after being physically sick.

Thick Leeyonce, who is an advocate for body positivity, was one of models who took to the runway for the Woolworths fashion show, drawing applause from the audience.

However, a video of her walking on the runway was ridiculed on Twitter, with users body-shaming her and complaining that she was walking like someone on the way to a spaza shop.

Reacting to the comments, Thick Leeyonce said she did not usually care what other people thought, but cried after reading the hatred aimed at her.

She poured her heart out on a post, saying modelling at the Fashion Week was probably one of the best days of her life, but that it ended badly.

"I was so anxious about walking in a fashion show with models who have years of experience and who are a lot smaller than me," she said.

"I was skeptical, but my mom said 'do it for the next big girl who wants to be a model but thinks it's impossible', and so I did it...

"It's been four years of online abuse and cyber bullying, but yesterday I got really sad.

"I'm tired of hearing 'ignore them' because I am expected to be 'ok' with this. This is not ok. Don't tell me not to mind this because I do."

SA Fashion Week moved swiftly to condemn the attacks. Founder and CEO Lucilla Booyzen commented: "It's very unfortunate and uncalled for. I don't stand for it. Any hate speech is a reflection of our society. We (Fashion Week) are about inclusion and have in the past used mature models, handicapped, all heights and sizes, it's about what the designer wants.

Booyzen explained that models were chosen by designers to suit their target market and strategies, adding that Woolworths chose to use Thick Leeyonce.

Woolworths said they were mortified by the backlash, adding that they would fight against those intent on destroying others through body-shaming

Kirsten Hewett, the head of communications, said: "It is unacceptable in this day and age that someone would be bullied because of how they look or how they carry themselves. We are mortified by this. We are trying to embrace all women, and people are bringing others down.

"We embrace body positivity and Thick Leeyonce embodies that for us. We will continue to use her as our ambassador and strongly condemn any bullying."

Actress Nyalleng Thibedi, who is also Thick Leeyonce's friend, said: "We need to ask ourselves what we use social media for, to build or destroy. People use it to harass celebrities. Lee is appreciated by international artists, but not here at home.

She is a pioneer and she's going to get most of the heat, but it's not justified. We shouldn't judge each other on physical appearance, but character."