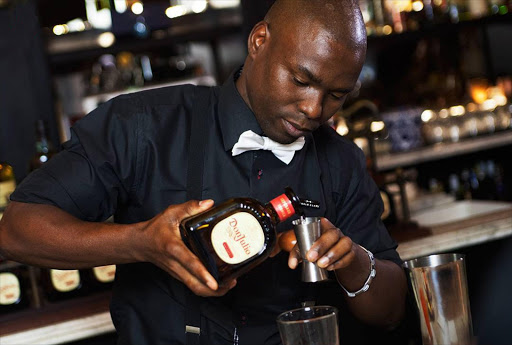 Ayanda Khanyile serves it up behind the bar.
Image: Supplied

SPONSORED | Modern-day bartenders are driven to conceptualise, refine and consistently replicate great cocktails, and not just as a matter of professionalism: mixology has become a competitive sport.

The national victor will then represent South Africa in Mexico, where mixologists from around the world will compete for the title of “World Class”.

We spoke to Durban’s Ayanda Khanyile, one of the 10 finalists fighting it out for championship status, about his passion for the profession, what it takes to be great, and his own unexpected foray into the industry. He also let us in on a few cocktail-recipe secrets for the winter!

How did you get into mixology?

I got into mixology while I was working at Keys. There is an outdoor bar there, and the bartenders they hired to work it were always stealing. One day, the bartender at the outside bar was caught; it was so busy, and there was no one else to work there. They asked me to do it, because the other bartenders didn't like that bar – they always said there weren’t any tips. But I worked there, and I was making nice cocktails.

People were telling me I was good at my job and they couldn’t believe it was my first time working as a mixologist.

What’s the difference between a mixologist and a bartender?

A mixologist is a person who is skilled at mixing cocktails and other drinks, and a bartender is the person who serves the drinks at the bar.

What do you love about mixology? How did you feel when you found out that you had been awarded a spot in the top 10?

What I love about mixology is that it takes art and skill, and I have all of that. I feel so happy that I made the top 10. I'm also so happy to be representing KwaZulu-Natal. To be in the national top 10, for me, feels like I won the world class.

What are the pros and cons of being a part of the bartending industry?

The industry is nice because you are always meeting different people, although sometimes when a person is drunk, he or she just says anything he or she wants to, and can be critical even when you haven’t done anything wrong.

What advice would you give to anybody just starting out as a mixologist?

Someone who is starting out as a mixologist needs to know the tricks of mixing a nice cocktail: they need to know how to make it sweet, sour, bitter or strong.

What is your favourite winter cocktail recipe? Please share your secrets for this recipe with us!

This article was paid for by Diageo.