The war is over: Robert Marawa and Fikile Mbalula have made peace 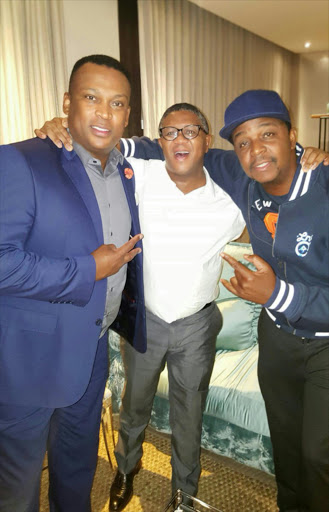 Minister of Police‚ Fikile Mbalula and sports presenter Robert Marawa have finally buried the hatchet after weeks of public spats.

Robert and the minister were convinced into talking about their differences during a ‘sit down’ set up by music veteran Oskido‚ who is a personal friend to both of them.

Speaking to TshisaLIVE‚ Oskiso confirmed that Robert and Mbalula met on Monday night‚ and resolved their differences.

“They are both my best friends and I decided to call them for a meeting and they agreed so everything went well. So Fikile and Marawa are buddies‚ no more fighting‚” Osikido said.

Oskido also shared a picture of the police minister and Robert shaking hands.

“Conflicts and fights are a result of a failure to sit down and talk. This often leads to undesirable drama. It’s good to see two people I hold highly‚ @robert–marawa and Minister of Police‚ hug and make up after talking‚” Oskido said in his caption.

Conflicts and fights are a results of a failure to sit down and talk. This often leads to undesirable drama. It's good to see two people I hold highly, @robert_marawa and Minister of Police @fikile@balula, hug and make up after talking. To quote Gandhi - "And eye for an eye will make the whole world blind". Peace Ma'Gents #fikilembalula #nazooooo #robertmarawa #Amagrootmaan #peace #ibelieve

2,044 Likes, 74 Comments - @oskidoibelieve on Instagram: "Conflicts and fights are a results of a failure to sit down and talk. This often leads to..."

Robert also took to Twitter to share that they had squashed the beef and thanked Oskido for the intervention.

We met. We spoke. We resolved. We shook hands. Thank you @OskidoIBelieve for the intervention. Let's fight crime @MbalulaFikile