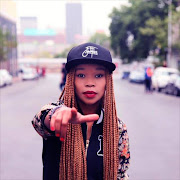 Rapper Fifi Cooper is spreading her wings in the entertainment industry and will be presenting a new hip-hop dance show on SABC 1 called‚ Break The Beat.

The rapper‚ who has been ‘fending’ for herself since becoming an independent artist‚ told TshisaLIVE that the presenting gig came at a great time and the money will help fund her album.

“It was really overwhelming when I found out.  The timing is perfect. I am having so much fun and‚ at the same time‚ making money towards releasing my album‚” she said.

The rapper will be presenting a show on TV for the first time and said that she believes she was called for the gig after “nailing” a link when she visited another SABC show‚ Mzansi Insider.

“They me gave me a call and briefed me on the concept of the show and what they would want from me. I loved it and even more so because I can fuse in vernac. That’s important for me as a Motswako artist‚” she said.

Fifi said that she would love to do more presenting gigs and revealed that she loves the flexibility of the shooting hours‚ as they give her time to “work on my music and album“.

She added that that she does not have the official date for the premiere of the show‚ but fans can expect it around the end of May.