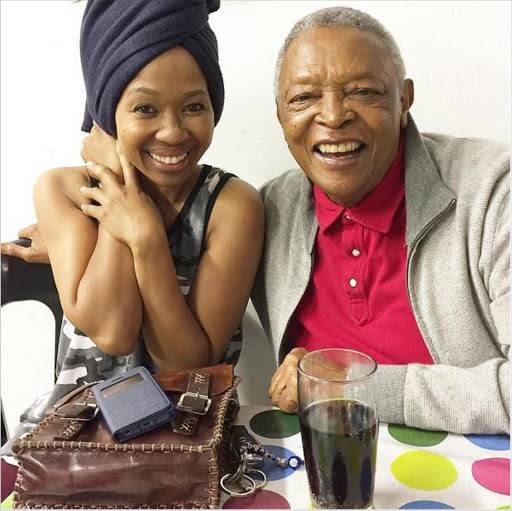 It’s no secret that Hugh Masekela has declared a mighty war on weaves and besides refusing to take pictures with women who wear weaves‚ there have been reports about the musician increasing his security to stop women wearing weaves near him.

And his attitude is no different when it comes to celebs.

TV personality Dineo Ranaka posted a picture of herself with Bra Hugh but she had her hair covered in a “blankie.” Dineo explained that she had to cover her weave so that she could have a picture with the legendary musician.

“So all I had in my possession was a blankie and I was very happy to wrap my hair in it for a photograph with him! It’s a true story ladies — Bra Hugh (I prefer to call him Ntate Hugh but he insists on Bra Hugh) will not be photographed with any artificial or straightened hair!“

Dineo wasn’t offended by the demand though and simply covered up.

“Most are offended by this‚ however I’ve learnt to not let the opinions or preferences of others kill my joy. Respecting each other’s differences and being open to meet one another half way makes life and it’s precious moments all the more pleasurable — I refuse to let ego rob me of a moment to smile and be merry! We laughed a lot in this moment — he’s a lovely man!“

Well‚ perhaps there was some lenience on Hugh’s part considering he knew she had a weave. Others aren’t allowed close if their hair isn’t all natural.