The lady in the yellow dress: 'My daughter takes most of my nude pictures' 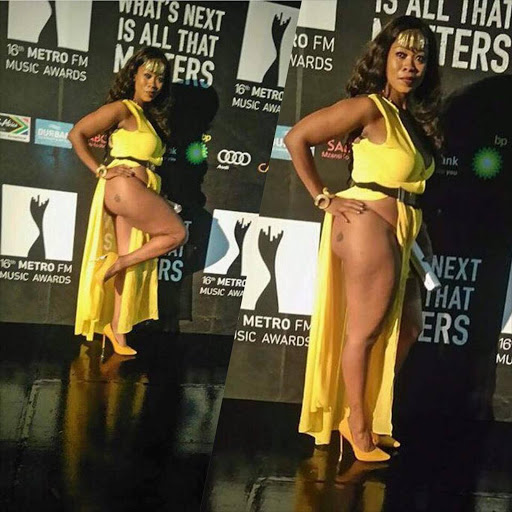 Nonhlanhla “Skolopad” Qwabe‚ aka the lady in the yellow dress at the Metros‚ has come out strongly against criticism over her “lack of dignity” in the past few days.

Skolopad became an overnight internet sensation‚ after she showed up at the music awards in Durban on Saturday night‚ wearing a revealing yellow dress that showed off her half-naked body.

The singer’s half-naked pictures caused quite a frenzy on social media which was inundated with nasty comments and questions of the type of role model she was.

Some people even labelled her an “attention-seeker‚” however the negativity has not deterred Skolopad from her mission to encourage other women to embrace their bodies.

During an interview with TshisaLIVE‚ Skolopad explained that nudity wasn’t a big deal for her.

In fact she’s even taught her daughter to embrace her body. She even went on to say that her teenage daughter is responsible for most of her semi-naked pictures on social media.

“Believe you me‚ most of my half naked pictures‚ is my child who takes them. My daughter takes my pictures for me and even advises me on what to wear or how to pose sometimes‚” Skolopad shared.

The songstress added that nasty comments about her nudity didn't bother‚ because she was used to it. Skolopad has even broken up with many guys who couldn't accept her love for being naked.

The singer revealed that on many occasions she was told to choose between her career (and everything that accompanies it like the nudity and provocative dances and poses) and her ‘man’.

Let’s just say Skolopad is single and loving it. She said that she would always choose her music and body over a man.

When asked about the ‘Q’ tattoo on her behind‚ Skolopad explained that it stood for the word queen. “The ‘Q’ stands for queen because I reigns in my life‚” she said.