Mfiliseni bounces back with lots of love 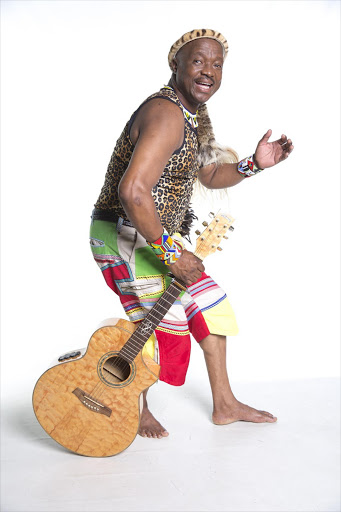 After a four-year hiatus, maskandi maestro Mfiliseni Magubane has finally brought out a new CD - his 22nd album.

He oozes maturity and depth proving how comfortable he is with his style.

Titled Ukhakhayi Lwespoki (meaning the Skull of a Ghost), it may sound scary but the humorous singer is only preaching love and the crazy things people do when they are in love.

Popularly known as Mqabulasheshe, Magubane is a kind of a guy who believes that women deserve to be loved so that they can love their men in return.

"We need to value and respect women. They are important whether it's your mother or girlfriend. They need to be encouraged because they play an important role in our lives."

In the song Gabi Gabi Ngothando, he sings about a woman he met in Mtubatuba, northern KwaZulu-Natal, who spurned his advances.

"I call the song Gabi Gabi because this woman was playing hard to get though I could see that she also had feelings for me.

"This annoys me because I'm the kind of a guy who loves wholeheartedly when I fall in love."

Some songs in the album offer constructive advice aimed at repairing the damaged fibre of society, the joys of accepting the sadness of things we cannot change and government blunders.

He says he is influenced by music from other genres such as jazz, blues and R&B.

He fuses live musical theatre with traditional maskandi as well.

"I guess travelling the world has opened my mind when it comes to music. I listened to artists such as Randy Crawford and Dolly Parton."

Magubane was exposed to international sounds while working with theatre legend Mbongeni Ngema. He joined the thespian while he was doing the hit musical Sarafina!. He was also part of Ngema's projects Magic at 4am and Maria Maria.

"We rehearsed at the Market Theatre and went to New York. We opened at West End and toured other countries. While working with Ngema, I fell in love with the theatre musical style, that is why my music is fused with it."

In between theatre musicals, Magubane pursued his solo career releasing albums such as Insimbi, Woza Sambe, Umeli, Iqoma Iquleke and Thenjiwe, among others.

Magubane hails from Ngundwini in the Eshowe area in northern KZN. He started performing from the age of eight, with indigenous instruments such as umakhweyana and istolotolo (mouth harp).

This early introduction to music was due to the fact Magubane comes from a musical family. His progress to the guitar was effortless because his father and uncles were masters of the instrument.

He says he has lasted long as a professional musician because he was never driven by money.

"We all need money, but if you are in the music industry for it, music will frustrate you. You need to have love first, then money will follow."

Before he became the music star that he is, Magubane worked as a cook in Durban hotels. When Ngema recruited him he was working for a furniture shop. And now he's at the forefront of maskandi.