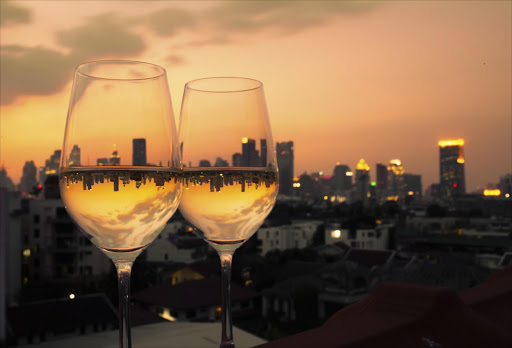 Rapper AKA has resolved to showcase his flashy lifestyle and "sh*t on the haters". His comments have sparked a storm of debate‚ with fans and experts all weighing in on AKA flaunting that guaped life.

In a series of tweets at the start of the new year rapper AKA shared with his fans that he would be travelling to Thailand and Hong Kong on vacation. A vacation the rapper claimed would cost him “an arm and a Rolex”.

Sure‚ the Supa Mega earns big money. The musician apparently signed a 'multi-million rand' deal as the face of Cruz Vodka late last year. He also famously took to Twitter in 2016 to claim that he charges between R90‚000 and R130‚000 for a 30-minute gig. Multiply this by the insane amount of gigs that he performed over the festive season‚ and you see that he is not exactly struggling financially.

But how much have AKA and Bonang forked out on their trip?

According to Flight Centre‚ a first class plane ticket to Thailand via Hong Kong costs around R90‚000 return. Although‚ AKA later tweeted that R100‚000 would "not even cover the (cost of) flights".

The couple have been staying at the Paresa holiday resort in Phuket‚ Thailand. According to the resorts website‚ accommodtion can range from R5‚000 a night to R40‚000 a night. And by the looks of B and AKA's snaps‚ their crib looks fancy!

Of course‚ that's just the basics taken care of. Don't forget all those fancy dinners and expensive champers!

AKA is going to be shooting a music video while in Thailand and you can bet that those extras are going to add to the tab.

"I’ll be sh*tting on the haters from dizzy heights"

Before jetting off to Thailand‚ AKA revealed that he would no longer be ashamed to flaunt his money‚ and warned haters that he would be "sh*tting" on them.

"Told myself in 2016‚ I would never be subjected to the humiliation of flying business class again. I’ll be sh*tting on the haters from dizzy heights over the next week. You have been warned‚" the rapper declared on social media.

But for several months he’s been flaunting his money on social media‚ showing off his upmarket house in Bryanston and a car worth over a million rand. He also recently splurged over R50‚000 on a new bag for his girlfriend Bonang Matheba.

AKA's most recent comments saw the rapper labelled as "arrogant". He responded to this criticism by telling his haters to confront him if they had a problem.

“100% of the bullshit people have said to me on Twitter‚ has never been said to my face‚ in real life. I think that’s an amazing statistic‚” he tweeted.

But AKA's resolution has drawn criticism from cultural experts‚ who have warned against the practice of showing-off.

Speaking to TshisaLIVE on Tuesday‚ Thoko Mkhwanazi-Xaluva of the Commission for the Promotion and Protection of the Rights of Cultural‚ Religious and Linguistic Communities said that the practice of 'showing-off' was not culturally acceptable and went against the principles of ubuntu.

"This behaviour is not acceptable and certainly not ubuntu. Ubuntu says that we are all equal and if any of us have more than another we must share. This practice goes against this. This is a western concept and is not culturally sustainable. It is not right that those who have means show-off while those who do not‚ are on the sidelines watching‚" Mkhwanazi-Xaluva said.

Mkhwanazi-Xaluva added that the commission's research had found that such behaviour had a destructive effect on the people who are exposed to it and had the potential to destabilise communities and the nation as a whole.

"It widens the gap of inequality and makes people who do not have feel miserable. People who are exposed to it want what is being displayed too and they are often left desperate. Such a practice increases vulnerability in communities and destabilises the entire country‚" Mkhwanazi-Xaluva said.

Siba Njoba‚ a financial planner at Alexander Forbes‚ told TshisaLIVE that many celebrities fall into the trap of showing off without adequately preparing for their financial future.

“Many sports stars and celebrities are tempted to show their lavish lifestyles and new-found wealth by buying luxury cars‚ splashing out on expensive overseas holidays and designer fashion. The danger around splurging is that many celebrities’ riches are short lived‚ like anyone who has just come into money be it via winning the lottery or getting a large bonus at work. They should consult a registered financial planner to assist in making responsible decisions which will ensure they are financially-sound well into the future‚” Njoba said.

Of course‚ AKA is not the first celebrity to come under fire for his exhibitionist lifestyle.

Rapper Cassper Nyovest was criticised for the same thing late last year‚ after he took to social media to post a picture of himself standing on top of his two Bentleys‚ worth a combined amount of over R7 million.

His behaviour drew sharp criticism from‚ among others‚ musician Ntsiki Mazwai who labelled Cassper actions "braggy" and "degrading".

She claimed that Cassper's friends‚ who had climbed on top of each other to take the picture‚ had risked injury so that the rapper's ego could be stroked. She had earlier labelled the rapper an "undercover a**hole" and claimed that he had either changed or had been "faking" humility all along.

At the same time‚ friends including Somizi defended Cassper‚ saying that no one should be embarrassed about their success and encouraged him to live his life as he wants to.