Gospel giant S'fiso Ncwane's voice silenced - 'His music was so good and touching that we both cried'. 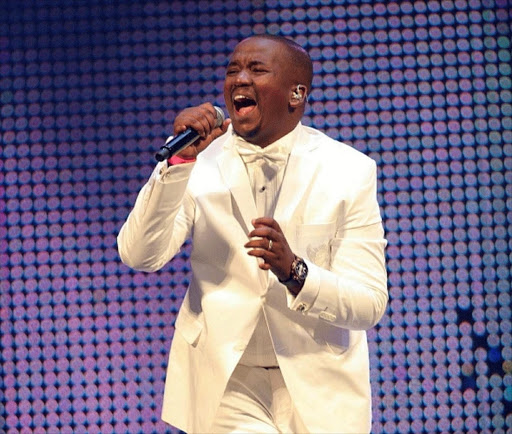 S'fiso Ncwane felt weak a few minutes before his performance on Sunday, and that marked the beginning of the end of his life.

The gospel giant was one of the headline acts at the Kaya FM Music Festival at Walter Sisulu Botanical Gardens in Roodepoort.

Gospel star Sipho Makhabane, the family spokesman, told Sowetan that after he took ill, Ncwane went back home in Fourways, northern Johannesburg, to rest. "At around 5pm on Sunday, he became worse and his wife called emergency services to take him to the hospital at Fourways Life. Doctors discovered that he had kidney failure and he died yesterday morning."

Makhabane, who last worked with Ncwane in September during a live recording of Mpumalanga Spirit of Praise, said the industry had lost one of the most talented musicians. He praised Ncwane for an extraordinary skill of using music to minister.

Ncwane reached the pinnacle of his career with the anthemic hit single Kulungile Baba, that earned him Record of the Year at the SA Music Awards in 2013. Known as 6 Fingers for his extra fingers, he came to the fore after he was "discovered" by music impressario Tshepo Nzimande in the early 2000s through his Zuzmuzi Music label licensed to Bula Music. Yesterday, Nzimande was in shock. "He was a businessman in the industry. He could compose, arrange and sing. He was never jealous of writing music for other singers; he would say it was great for the industry. What's sad is that he leaves behind a young woman and children.

Nzimande said he was introduced to Ncwane by gospel singer Lundi, who had begged him to record Ncwane. "He had a unique voice with that distinctive soprano. He was unique in how musically gifted he was. You'd bring a song to him and how he contributed in making it complete was so special.

"He could sing R&B, kwaito and hip-hop but we confined him to gospel because he excelled in that. He had suffered a stroke on his left side and I had to take him to rehearsals and physiotherapy. He was a go-getter who wouldn't let anything stand in his way. He didn't apply his mind on the negative. I remember he had a problem with chest pains and had to perform on the Felicia Mabuza-Suttle show, he begged me to allow him to perform, even if it meant seeing the doctor for some painkillers. He never wanted to miss a show, that's how much he respected his audience."

Nzimande said he last saw Ncwane in the run-up to the Moshito Gospel Show where he performed on November 6. "We did a lot of TV shows and radio interviews ... he was very happy and noisy."

Lundi Tyamara said he last saw Ncwane performing on Saturday and he was fine.

Lundi met Ncwane in 2002 while rehearsing on Plein Street in Johannesburg. He brought Lundi his cassette to listen to and see if he could get him a deal.

"I remember playing his cassette in my car, I was with Brenda Fassie. His music was so good and touching that we both cried."

Lundi took the cassette to Tshepo Nzimande, who did not waste time to sign Ncwane. He said since then, Ncwane became his close friend, who also helped him financially when he needed money. "I still remember how we ran round confused when his wife Ayanda was about to give birth to their first born. Ncwane was a talented singer and the industry will miss that."

Ncwane has battled many health issues in his life, such as fainting spells, stroke and a heart attack. He also survived a lightning strike.

Following the heart attack, Ncwane thanked his "spiritual father" Reverend Francis Anosike, whom he said saved his life, by buying him a R1.9-million Mercedes Benz as a gift.

He was a gifted artist

Ncwane was born in Mthwalume on the KwaZulu-Natal south coast on April 21 1979.

He was raised by his aunt, and started singing at the age of eight.

His professional singing career began in 2002 with the album Makadunyiswe. He further released albums such as Inombolo, Umkhuleko, S'fiso and Baba Ngiyabonga.

His biggest hit, Kulungile Baba won the Record of the Year at the SAMA in 2013, and at the AGMA Award (London-based gospel awards). He worked with countless industry greats such as Rebecca Malope, Winnie Mashaba and Sipho Makhabane.

Ncwane passed away on the third anniversary of Nelson Mandela's death and the birthday of Struggle icon Robert Sobukwe. He is survived by his wife Ayanda and two children Ngcweti and Umawenzokuhle, as well as a daughter Nqobile from a previous relationship. - Patience Bambalele

Tributes pour in for singer

There was an outpour of disbelief, grief and sympathy following S'fiso Ncwane's untimely death yesterday, led by President Jacob Zuma with a statement: "The passing of Mr Ncwane is a massive loss for the country. His music touched the hearts of millions of people. He was one of the best gospel artists that the country has ever produced. We are deeply saddened. May his soul rest in peace."

Hlengiwe Mhlaba, pictured, said: "I don't know what to say because I don't believe that it's true."

Deborah Fraser: "S'fiso was very young and talented. We were still looking forward to more music from him."

Rebecca Malope: "Haibo! Haibo! Kanti ukufa kunjani? I have received an SMS saying 'its confirmed, S'fiso Ncwane has passed on', I am shocked. This is unbelievable, Haibo! Ingathi liphupho (It's like a dream)."

Kwaito legend Arthur Mafokate, pictured: "What a loss to the industry. He was a humble man of God and hard- working."

Afro-pop hitmaker Robbie Malinga: "To the family, as South Africa, we are with you in spirit. It's really going to be a dark Christmas."