Khemese showered with praises at memorial 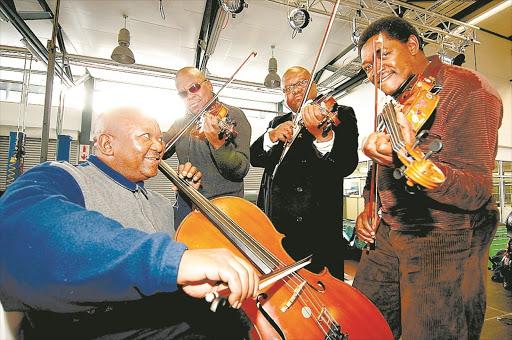 Soweto String Quartet member Reuben Khemese was remembered as a unifier who had a sense of humour at his memorial yesterday.

Khemese, 62, died on Wednesday after collapsing at his home.

Speaking at the service at the Bassline in Newtown, his first-born child Bulelwa Mabasa described her father as a brave and fearless man.

She said Khemese taught all his five girls not to be afraid and never to question agendas. "His senses were always alert, and he took his time. He encouraged us to read by buying us African literature [books]. He taught all of us violin."

She said they were all affected when their mother died five years ago. Mabasa added that Khemese did not die a pauper because he was a planner and visionary.

The ceremony was opened by veteran singer Mara Louw, who was also the MC.

The group played the emotional Lalangokuthula, which was composed by Mzilikazi Khumalo.

Mahlasela, who collaborated with the Soweto String Quartet (SSQ) on Weeping, said Khemese believed in the development of young musicians.

Kutloano Masote defined Khemese, his cousin, as a person who was never in a hurry.

"He took his time. He made sure everybody around him was well. SSQ showed us hope, they made it cool. He was a pioneer of reconciliation and nation-building. SSQ were trailblazers. They have played at local and international events."

Music promoter Morris Roda called on the 90% airplay to be transferred to live performance.

In a celebratory service, Roda told mourners that as local music was getting more airplay, the public needs to see those artists performing live. He argued that had it not been for the Thank You SABC Concert, many people would not have known that the Soweto String Quartet still existed.

Gauteng MEC for sports, recreation and culture Faith Mazibuko complained that there was inequality in the music industry. "A few weeks ago we had a packed memorial service for Mandoza. The programme was long abut today I don't see that, why?" Khemese will be buried on Friday in Alberton. The service starts at 8am at Mayfield.