My hot Ben10 was a joke‚ says teary Shaleen Surtie-Richards 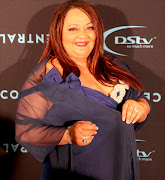 Pictures of veteran actress Shaleen Surtie-Richards looking loved-up with a mystery guy sparked massive speculation on whether she had bagged herself a hot young man.

YOU magazine reported that the actress confirmed the relationship‚ saying that it was “still very new.”

On her public Facebook page‚ Shaleen and the mystery guy are seen looking very cozy together.

On one of the posts‚ she replied to a question on when she would introduce her ‘bae’ to everyone.

But she has since done a u-turn‚ explaining that it was all part of an elaborate joke that has turned sour.

“We are very good friends and that is it‚” she told TMG Entertainment. “I cropped other people out of the picture and he and I both joked that we should tell people that we are a couple.”

The 61-year-old was very emotional‚ with soft sobs being heard during the phone conversation.

“This story has spun out of control. It’s very hurtful. It’s put me in a bad place with him. I’ve always kept my private life private and I’ve never had any scandal around myself. We are just very good friends and now he is very upset with me.”

She also posted a long message to her Facebook page‚ explaining to fans that it was all a joke that has now turned sour.