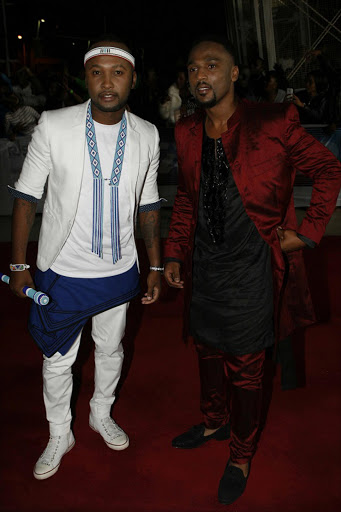 Last night was the biggest night in South African music. Celebrities galore made their way to Durban to atend the 2016 SAMA Awards.

Nathi and DJ Black Coffee  were the night’s big winners at the 2016 SA Music Awards held at the Durban ICC on Saturday night.

DJ Black Coffee continued his global domination with local accolades at the 22nd SA Music Awards‚ walking away with three trophies at the event‚ including accolades in the Best Engineered Album‚ Best Dance Album and Best Album categories.

In a series of touching moments‚ the artist’s mom accepted two awards on his behalf.

Black Coffee was also awarded the International Achievement Award at the event.

Lifetime Achievement awards were given to Roger Lucey‚ the late Bhekumuzi Luthuli and the late Nana Coyote.

Hip-hop artist Emtee‚ who scooped four awards at the recent Metro FM Music Awards‚ continued his dominance at local music awards with two major wins at the SAMAs‚ including awards for Best Rap Album and the prestigious Record of the Year Award.

Emtee beat out the likes of the likes of AKA (Baddest/ All Eyes on Me)‚ Black Coffee (We Dance Again)‚ K.O (Skhanda Love)‚ Nathi Mankayi (Nomvula)‚ Timo OVD (Save Me)‚ Prince Kaybee (Better Days)‚ Riky Rick (Boss Zonke) and Four7 (J’Adore) for the Record of the Year gong.

It was also a great night for Big Nuz who walked away with two awards each.

The combination of Somizi and Thando Thabethe as hosts of the South African Music Awards had to be the best decision ever.

Yeah‚ they had a grand entrance. And yes‚ they looked amazing.

More importantly‚ the spice that these two were throwing around had us rolling on the floor.

Here’s some of the funniest comments... so far

Somizi says some of the Big Nuz members need his fitness DVD.

Thando asks whether Phat Joe is suspended. Then lols and says whatever.

Bonang and AKA may have officially come out as a couple but fans were still hoping to see the pair together at the SA Music Awards in Durban on Saturday.

While those standing in the rain outside and at home were sorely disappointed not to catch an intimate moment between the pair‚ a beady-eyed observer at the awards made sure that one of the few intimate moments shared by the couple didn’t go unnoticed.

Pictures of B and AKA backstage at the awards were captured.

The couple looked super loved-up in the snaps‚ with rapper AKA seen holding B’s bottom in one of them.

Pearl Thusi found herself in the middle of a social media storm as Twitter fashion police took aim at her SAMAs 2016 outfit.

The annual music awards ceremony has become known for the glitz and glamourous red carpet fashion‚ where Mzansi’s celebs pull out all the stops.

Of course no one is safe from Twitter fashion police who are out in full force giving their stamp of approval. And not everyone passed the test.

Pearl Thusi quickly found herself as a trending topic on the social media platform — for all the wrong reasons.

Trust the SAMA red carpet to bring all kinds of scandal. While Boity looked sexy in a blue number‚ she wasn’t trending for her dress.

Pictures of Boity’s dress were doing the rounds.

Some people started speculating that it  was the star’s private parts on full display (accidentally of course) while others were saying that it is just the way the shadow of the picture was taken.

Others speculated on twitter that her picture had been photoshopped.

There you have it, never a dull time at an awards show  in this country.