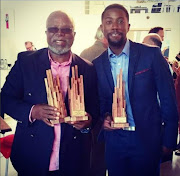 It explores apartheid injustices including the usage of Afrikaans and dompas.

The play was written by Kani, Athol Fugard and Winston Ntshona some 40 years ago.

Atandwa picked up the best actor gong while Kani walked away with best director and best production trophies.

Kani said the show proved that after 40 years it was still relevant and making social commentary.

He said when they wrote the show with Ntshona they opposed apartheid and encouraged people to fight for their rights.

"I am excited and to me it says we wrote a story that lives beyond its time. A lot of people are still being educated and learning from the story," said Kani.

The outspoken Kani said he was shocked when he got an invite to participate at the Afrikaans festival held in Oudtshoorn, Western Cape.

He said after a lengthy discussion with the two actors, Atandwa and Mncedisi Shabangu, they decided to accept the invitation.

"I asked myself how this English and Xhosa production was invited to an Afrikaans festival. To my surprise every day we performed it was packed with Afrikaners."