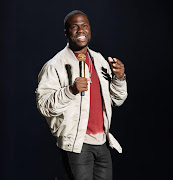 Kevin Hart has managed to sell out all his What Now? Comedy Tour venues in South Africa.

His last show in TicketPro Dome, Johannesburg was no different as 20 000 people descended at the venue and filled it to the brim.

South African celebrities came out in numbers, businessman Sbusiso Leope, actor Warren Masemola, comedian Celeste Ntuli and media personality Tumi Voster were among the list of celebrities that braved the chilly evening for some good laughs.

Although the show started almost an hour late, it was worth the wait and Hart's opening acts, the Plastic Cup Boyz did not disappoint although a bit of comedy about local stuff would have been really appreciated especially now that they have been in the country for a week.

However, Tumi Voster appreciated that he remained authentic and that he did not try to be "South African".

"I like his originality, I think that his content was so original and he creates his content out of things you wouldn't think about and it's real-life stuff so I like the fact that its not politics, it's not the usual that we hear. He was just authentic and himself and he didn't try too hard, he didn't try to be South African," said Voster.

Therefore when going into his comedy shows you look forward to hearing an update of what happened in his family since his last show. It's an ongoing story that one always wants to hear and actor Warren Masemola agrees.

"I think the show was well knitted, I love his story-telling in his comedy that is what makes it very humourous for me and a big time fan of his work because you are never left behind in the humour of the comedy," he said.

In his closing monologue, Hart reiterated how he was amazed when he landed in South Africa about how the country is developed. Something the American media hardly shows them.

This did not sit very well with Masemola, who said that Americans should do a bit of research on the country ahead of their visits and stop thinking that we live with animals.

"I think it [closing monologue] was very cliché because we've had that for more than ten years, people come into the country and say 'I expected to see an elephant in Sandton City', so if you Google what you want to see, you can find it. So I think we should stop talking about what we expect of Africa as Americans because technology is really good," said Masemola.

He said that Americans must also choose to follow media that show a true reflection of African countries.

Hart said that he will be returning to South Africa in three months for his 5km run and again in 2017 for another comedy tour.