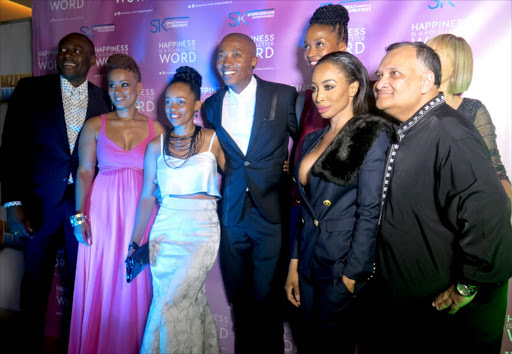 The cast and crew of ‘Happiness is a Four-Letter Word’. Picture credit: Emmanuel Tjiya

The release of local film Happiness is a Four-Letter Word smashed box office expectations in its opening weekend.

The film starring an ensemble cast, with Khanyi Mbau, Renate Stuurman and Mmabatho Montsho in the lead, officially hit theatres on Friday.

Directed by Thabang Moleya, the movie was also the best performing film of all new releases over the weekend; managing to beat international releases such as 13 Hours,Secret soldiers of Benghazi, Hail Caesar!, 50 Shades of Black and Trumbo.

Furthermore, the movie about three career women in search of true love in the 'city of gold' – Johannesburg – ranked at number 3 on the Top 10 behind Deadpool and Vir Altyd.

“The opening weekend’s results for the film are simply overwhelming not only  from local content perspective but also in comparison to Hollywood content. Rewarding for the whole Happiness is a Four -Letter Word team that great films get a positive response from audiences,” CEO of Ster Kinekor Entertainment Mario Dos Santos said in a statement.

Prolific names including pop songbird Lira and house maestro DJ Black Coffee garnered some viral buzz for the movie by sharing their excitement about watching the film on their various social media platforms.