Adele: Sarah Palin made me successful 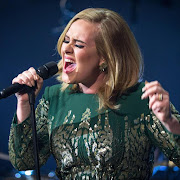 Adele at the BBC

Adele feels ''lucky'' that Sarah Palin appeared on the same episode of 'Saturday Night Live' as she did as she thinks it helped her career.

The 'Hello' singer doesn't think she'd have done as well Stateside if the controversial politician hadn't rearranged an appearance on iconic US TV show 'Saturday Night Live' to co-inside with her own performance on the programme.

''It was one of the most watched 'SNL's ever and it was two weeks before the Grammy ballot, where people decide what they want to nominate, the stars aligned for me. ''The album shot to number one on iTunes, then I was nominated for a Grammy, it was a joke. All thanks to Sarah Palin.''

The 27-year-old star has never toured extensively, and is still unsure whether she'll take '25' on the road beyond the UK. Speaking to Graham Norton for her forthcoming TV special, 'Adele at the BBC' - which airs in the UK on BBC One on Friday (20.11.15) - she said: ''I haven't decided, I'll definitely do some shows in England because I live here so it's easy. ''I'd like to but it's a big deal and I want to make sure I do it right.''

During 'Adele at the BBC', the chart-topping singer performed a number of her classic tracks and some new material, as well as chatting with Graham and even showing her comedic skills in a hilarious yet touching sketch.