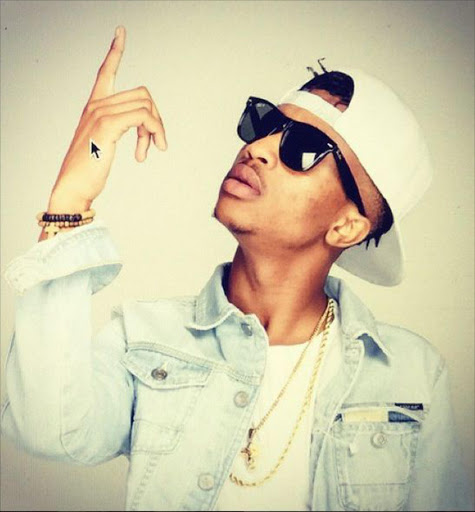 Some of the world’s greatest things were put together at the eleventh hour under strenuous pressure, the same can be said about new kid on the block Emtee.

His hit song “Roll Up”, which can be said is responsible for club goer’s tears after overspending the night before, was recorded in one day.

Emtee Da Hustler, real name Mthembeni Ndevu, is the talk of the town, even the songs he's featured on become hits.

“We recorded Roll Up under pressure because the following day we had to release the project, so I recorded a lot of stuff and told my producer Ruff what to remove,” he said.

He has even grabbed the attention of a popular rapper and All Eyes On Me hitmaker AKA who could be featuring in the Roll Up remix.

“Now I can get a call from even AKA saying we should chill, whereby a year ago I never thought such things would be possible but then knowing what I want, knowing where I‘m going, I kinda took a big risk,” he said

Having just turned 23 recently, Emtee, unlike most people his age took a life changing path that had no foreseeable outcome.

“I didn’t have any educational background whatsoever while a lot of my friends were going to tertiary, I couldn’t go because my matric certificate wasn’t that good and going to upgrade marks and all, I found it as a waste of time for me so while my friends did all of that  I was in the studio.

“At that time I knew that I actually should be at school or working, because I knew that if this doesn’t payout then I’m done, it’s over for me so I had to invest my time and energy into this because I’m good at it,” he said.

Today Emtee gets to sit at the table with the big guns of the music industry which includes Maggz, Kid X, Smashiz and more.

However the youngster owes most of his success to the veteran rapper Maraza.

“From leaving high school I met a friend Maraza in 2009 who was like my mentor. We met randomly at a random place so I told him he needs to listen to my stuff. I had my phone with me and I made him listen to it immediately and he loved what he was hearing and invited me to his place to talk about what I was trying to achieve.

“He was my mentor, he’s like big brother to me. A lot of the things that I know right now is because of him.”

Maraza took it upon himself to introduce Emtee to the music industry whenever he could.

“He introduced me to people he knows and told them what I do. I wouldn’t be where I am today if it wasn’t because of him.

“I learned a lot of fundamental things that have nothing to do with the technicality of music or entertainment. I learned to be patient, I learned to take time with my work.”

A lot of people have been left confused by some of the lyrics on the song, especially where he mentions legend Hip Hop Pantsula.

“I was really sceptic about a lot of things on the song like the HHP uzenz’ iBosso lo line, because I was referring to HHPs big hit which was Bosso Ke Mang.

“Something that  was amazing about that line is that I went to HHP the following day after we had finished the song and played it for him. He liked it because it was spontaneous. He laughed actually and loved it, he actually did say that this is going to be a problem, a hit and he did not find it offensive.”