Mazwai is on the right track 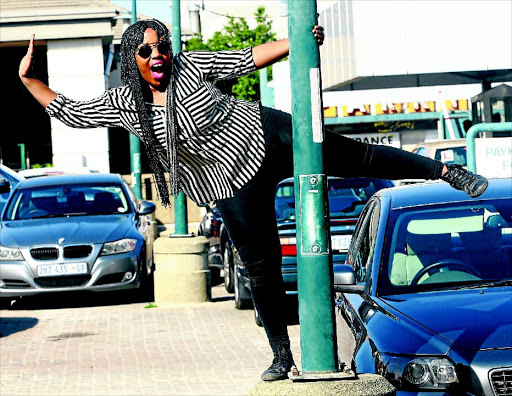 artistic: Nomsa Mazwai will be performing at a music and poetry festival at The Bassline in Newtown, Johannesburg Photo: Veli Nhlapo

Poet and singer Nomsa Mazwai is the epitome of a complete artist.

This was clear when I met her in Rosebank, Johannesburg, to talk about her upcoming performance at the Speak The Mind Poetry and Music Festival.

The minute she opens her mouth, you can tell she is like her sisters, Thandiswa and Ntsiki. The Mazwai sisters have a lot in common, including being artists. They are also not afraid to express themselves.

In spite of her ability to understand politics and economics, Mazwai likes to be defined as a creative person. She is a poet, performer, singer, writer and budding comedian.

Growing up in a family of creatives - with her sisters in the performing arts, and her parents writers of note - her career was predetermined.

"My poetry speaks about the economy, social issues and politics of the country. When you're listening to my work, you get a sense of the state of the country through it."

"There is room for poetry to progress now that people are questioning the scarcity of performances," she says of South African poetry.

"On the other side, poets are trying to be creative in terms of approach to their performances in order to score gigs. If you don't evolve, you get left behind."

Apart from her poetry career, Mazwai, who was born in Johannesburg in 1985, is also a singer and has just released her second album titled Nomisupasta.

In the album she works with Black Coffee, and Mpho Pholo and Aphiwe Bhunu. It has about 16 tracks and features some songs from her debut album, Nomisupa, which she says wasn't distributed well, hence she decided to include some songs from it.

The style of her latest album is drum and bass, mixed with Afrojazz and a bit of Afro-pop. "It is a musical journey and presents you with a nice and diverse sound."

Mazwai is planning a music tour called Summer Butterflies that is expected to start in November and end in June next year.

It will include live performances and private parties in different locations. The tour will be officially launched on November 29 in Soweto. Mazwai is also an author. She published her first book Sai Sai in 2005 and says she wants it to be re-presented as it is still relevant to what's happening in South Africa.

She says the book highlights the difficulties women face in leadership and her experiences at Fort Hare University.

"The country is coming of age because it is about to turn 22. It is grappling with the same issues that I was confronted with when I was also 22."

When asked about her forever controversial poet and performer sister Ntsiki, Mazwai says: "Ntsiki just tells it like it is. Sometimes truth is so uncomfortable to tell.

"I think people live a life that is pre-defined for them and they have made that a normality."

Mazwai, together with Kabomo Vilakazi, is among the poets performing at the poetry and music festival tomorrow evening (7pm) at The Bassline in Newtown, Johannesburg.

Mazwai says she will be presenting a combination of live music and poetry.