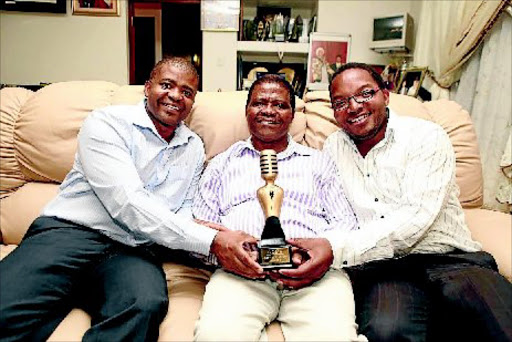 POSITIVE: Joseph Shabalala, centre, his son Sibongiseni, left, and Xolani Majozi with a model of the awards PHOTO: SUPPLIED

Music icon Joseph Shabalala has lauded the establishment of the Isicathamiya music awards.

"Thanks for coming up with this vision. I can now rest assured that Isicathamiya will never disappear. It has been my dream to see this genre given the prominence it deserves," Shabalala said.

The concept of the Coma awards came with Xolani Majozi and Sibongiseni Shabalala. The latter is the son of the legend and the current lead singer of Ladysmith Black Mambazo.

Speaking to Sowetan yesterday, Sibongiseni said establishing the awards that honour Isicathamiya music groups was another way to to grow the genre.

"Isicathamiya is one of the oldest authentic music genres that are truly South African.

"If it is not recorded it will be difficult to preserve. The rise of this music genre will also restore humanity, patriotism and unity among South Africans," Sibongiseni said.

Majozi, who manages Mambazo, added that the new awards signalled the rebirth of Isicathamiya and Mbube music.

They plan to launch the awards next year together with the first Isicathamiya Festival.