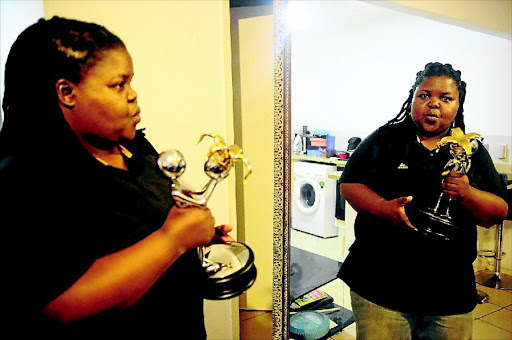 She spent almost a year squatting at her younger sister's flat without any income.

The hunger of breaking into the stand-up comedy scene fuelled by the desire to make her mother and son back home in Whittlesea, south of Queenstown, proud was enough to propel Bunu forward.

Last weekend, she achieved her first milestone when she made comedy history by becoming the first woman to win the coveted audience choice award at the Comics' Choice Awards at Montecasino, north of Johannesburg. Hers was the only category decided by the public's SMS vote.

"People who have won this trophy before me told me that it comes with a lot of hating in this industry. I don't mind that," says Bunu from her Centurion home, admiring her silverware.

"To me this trophy represents a big step in my young career. I've been on many TV shows before but I always felt that I needed just one thing to break me into this industry. I have achieved that with this trophy even though I may not be even halfway where I want to be as a comedian."

Her biggest dream is to make it internationally - something she recently tasted while on a government-sponsored trip to New York. She and other filmmakers from SA were taken to a nine-day film festival in the Big Apple in April.

"I was there to network for my upcoming documentary and film. I got to do three performances at Greenwich Village Comedy Club. It was amazing. They have a big stand-up comedy culture there."

The single mother quit her teaching job in April 2008, six months before she came to Johannesburg to try her luck onSo You Think You're Funny, a stand-up comedy competition on SABC1.

Bunu was knocked out in the top six, but she had made a good impression and people encouraged her to continue.

"I didn't have a plan or money. I knocked on many doors for open mic sessions and I also performed at smaller gigs. And, to pay my bills, I had to find a steady job."

She found a job as a teachers' mentor in Pretoria and later her current job as a lecturer at Ekurhuleni FET College in Germiston.

She does a lot performances and corporate gigs in the evenings. Some of her highlights in comedy were appearing in 99% Xhosa Comedy twice in Port Elizabeth and David Kau's Blacks Only Comedy.

She is doing her solo show Gratitude at the Centurion Theatre on September 3.