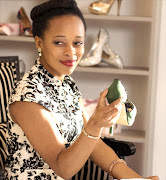 GOING UP: Mmabatho Montsho has landed big roles in her acting career. She now stars as Nandi in 'Happiness is a Four Letter Word' PHOTO: SUPPLIED

Every day for two years, Mmabatho Montsho was a nervous wreck while shooting scenes on Generations.

She acted alongside television stars like Xolile Tshabalala, Connie Ferguson, Akin Omotoso and Faye Peters from 2005.

Her nervousness was not as a result of being star-struck but because she had to learn acting on the job, in front of millions of viewers who dissected her every move, word and emotion.

Being a perfectionist, Montsho felt she did not have enough training to handle such a big role.

"For two years I learnt acting. I am lucky because that kept me focused," Montsho says.

We caught up with the ever-smiling Montsho on the set of the local feature film Happiness is a Four Letter Word in Norwood, Johannesburg.

Nandi seems to be living her dream, with all the money, success and loving partners. The film exposes what truly makes each of the three women happy.

"Nandi is about to make major changes as she questions certain aspects of her life," says Montsho. "Her biggest challenge is to be decisive. When she is about to get married a skeleton from her closet creeps out."

Montsho says Happiness is a Four Letter Word is different from other works because it has three female protagonists. This is her first lead role in a feature film.

Last year she played the lead role in a short film called uNomalanga and the Witch, which was directed by Palesa Shongwe. The film was shown last week at the Durban International Film Festival.

Montsho, who was introduced to television acting some 11 years ago, has come a long way. Apart from being a successful actress, she is also a television and film director. The idea to pursue directing came while she was acting in the drama series Jacob's Cross.

She has so far directed short films adapted from books for e.tv. She also directed the soapie Scandal! for a few years. Her focus now is on growing her profile as a director while putting in one or two acting jobs.

In the past three years she has been involved in the films Nothing For Mahala, uNomalanga and The Witchand the award-winning drama series Tempy Pushas onSABC1.

"I want to be good at it. I want people in the industry to know that I'm a director. Building a profile in this industry is a continuous process," she says.

After appearing in soapies Rhythm City and Generations, Montsho does not see herself in that environment again.

"Soapies are very demanding. You are on set every day."