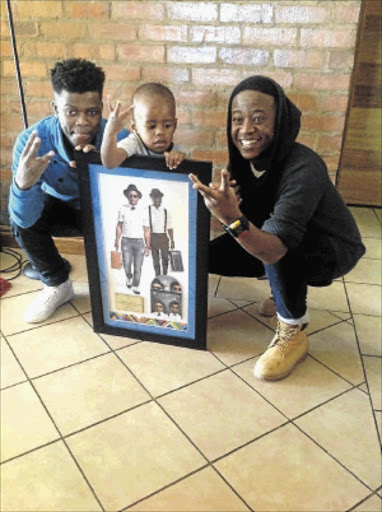 three's company: DJ AJ with Black Motion has no match when it comes to music PHOTO: SUPPLIED

After making headlines as the youngest DJ in South Africa, music whizz kid DJ Archie Junior is taking his artistic skills a notch up.

Popularly known as DJ AJ, the three-year-old boy from Alexandra has now spread his wings to play drums and is set to release an instrumental single soon. He will be collaborating with music group Black Motion.

According to Black Motion - which is made up of Robert Mahosana and Thabo Mabogwane - when DJ AJ arrived at their studio on Friday with his father, they gave him a drum and he played following a beat.

"We are overwhelmed by the boy's talent and how he played the drum. We are working with him on this single that will be released soon," enthused Mahosana.

DJ AJ's father Glen Hlongwane said it did not come as a surprise when his toddler mastered the drum since he was into music. A few months ago, AJ made headlines when the picture of him deejaying made its way to Facebook.

Hlongwane said he did not want to put his son under pressure because he was still too young.

He said AJ spent most of his time during the week at a crèche and only gets time to play on weekends.

"He only deejays when he is tired of playing with his friends. He is like any other three-year-old, he likes to play," said Hlongwane.

He said the young boy was also fascinated by computers. He said he can switch on a computer on his own, insert a password and even go to applications and open games.