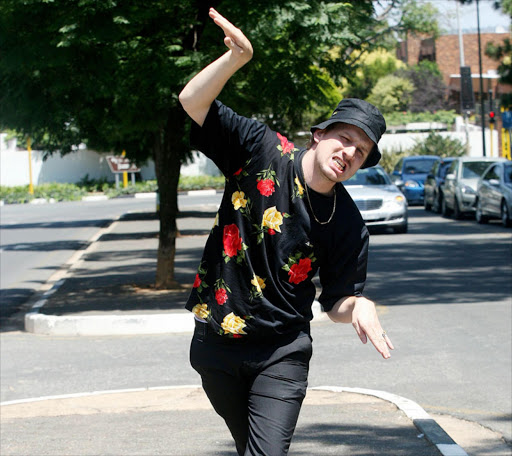 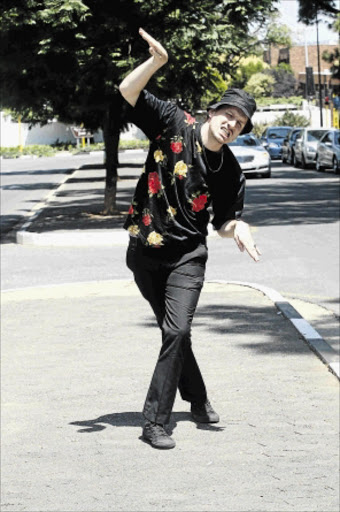 Pule is a black man trapped in a white man's body - Nicholas Richard Holmes Welch's specifically. Well, according to what the receptionist at our office says, it seems like he is.

"You know, I was looking at that boy, thinking to myself that he is wearing things that are not worn by white people," exclaims the woman as I meet the comedian, actor and host for our interview.

The sporty folded on one side perched on his head, gold rings and necklace and, to top it off, the DMD T-shirt he is wearing, make sense of the receptionist's comments.

Pule says he is from Ndofaya (Meadowlands). "Well, my parents owned a home in Yeoville, but we spent most of our time ekasi."

His parents, who were both teachers at the time, were involved in the struggle against apartheid.

"My parents were multicultural and took me everywhere they went. So when they'd go to a rally or something like that in the township, they'd leave me to play with the kids in Ndofaya."

He got the name Pule from a black "uncle" of his because he was born on a rainy day.

The term was made famous by township youngsters showing off their "wealth" by literally burning money, branded clothing and spilling expensive alcohol and custard.

Pule tells me: "I'm pushing Pan-Africanism. In a way I'm resisting, but at the same time being myself."

He is the co-host of the new SABC1 magazine show, Mi Kasi Su Kasi, with Kabelo "KB" Moremi. The show will see the two travel to different townships with a celebrity from that neighbourhood showing them around.

"KB is a cool guy, it's a nice balance we have between us."

The two do not appear together on the show, but alternate.

"I was in Clermont, KwaZulu-Natal, while KB was in Sebokeng last week," Pule says.

He talks of how entertaining the shoots have been. "I saw the most amazing garden in KwaZulu-Natal. The owner has been taking care of it since 1982. The garden has the most beautiful flowers and we also heard deep house playing in the garden, only to find out that the sound is coming from the trees."

Pule was one of the three hosts on Mzansi Magic's show Pls Call Me with Vinolia Mashego and Nestum, before its revamp. He got his break a few years ago, as the only white comic in the famously pirated stand-up comedy DVD shoot of Strictly Vernac, where he performed in Tswana. "It was a strong concept, and it was done in a ghetto way. I liked that," he recalls.

He has a passion for language, which led him to Wits University where he studied linguistics. Before that, he studied drama, majoring in physical theatre and clowning, also at Wits.

Pule speaks many languages and was recently part of Ster City, a play that toured 15 African states and is about the history of South Africa.

What made it more challenging was that the cast had to learn a native language in every country they performed in.

"Speaking someone else's language brings out a strong connection. You are more natural to people. That's why I love language; it has the power to undermine all these political differences that prevent us from communicating."

Pule doesn't have many white friends. "I'm now trying to be comfortable with having white friends and even performing for a white crowd."

He says he doesn't get scorned by black people, but gets stares in "high-class places" such as Rosebank and Sandton in Johannesburg.

"I think black people in urban places ba buy-a iskelem [buy face] because as soon as they get to these places they change, speaking English only. Educated black people look down on their culture."

He is also an aspirant rapper, known as Guaza Juice, and part of five-member group 3rd Wave.