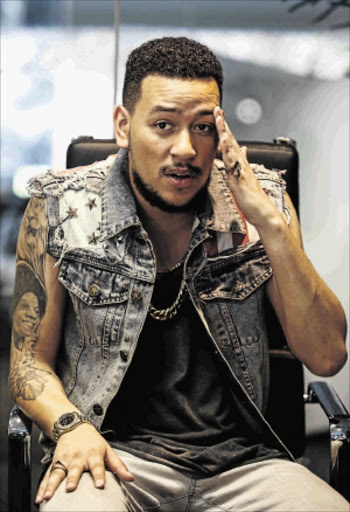 Rapper AKA has been accused of assaulting a fan in Botswana last weekend.

The controversial musician was in the neighbouring country to headline the Summer Explosion festival in Gaborone when he landed a "warm klap" on an overeager fan who dared to compare him to fellow local rapper Cassper Nyovest.

Onlookers told Sowetan that The All Eyes On Me hitmaker found himself surrounded by hundreds of fans who wanted to take photos with him after his performance. During the commotion AKA stepped out of his white Quantum minibus to appeal for calm as his security detail pushed back the marauding crowds.

A witness said: "While he was still trying to explain, a female voice interrupted him and he yelled 'Shut the 'f*** up, I am still talking'."

The witness related that as the 27-year-old lost his temper another fan yelled "Cassper Nyovest is better than you".

"When AKA heard that he slapped the young man, who fell flat on his face to the ground."

Sowetan caught up with the young man in question but he refused to be identified and said that part of AKA's crew had begged him not to press charges.

"I was just expressing how I felt after both their performances. I told him that Cassper Nyovest is the man, and that is the truth. Then he slapped me. They later came to ask that I should not press charges."

Event organiser DJ Kuchi said he was told about the incident but was not present when it happened.

"I heard that he slapped someone after the person called him Cassper Nyovest. I've not been made aware if he has pressed charges or anything, but I will follow it up."

lMeanwhile, Mashoto Lekgau reports that at the DStv iRock music festival in Port Elizabeth, AKA "demanded" to move from his hotel room at City Lodge, where all artists were booked, and to be placed at the Protea Hotel.

A well-placed source backstage said: "He said he was a four- to five-star n*****. He felt he could be treated better by the organisers."

Event organiser Songi Msimango confirmed that the rapper requested to be moved to the Protea Hotel from the City Lodge.

"It is just something he requested generally. He requested four-star minimum accommodation during negotiations.

"As a company, we had an agreement with City Lodge and that's where everyone went. It's a four-star set-up and so is Protea Hotel. So as far as why he wanted to go to the other one, I cannot answer that," he said.