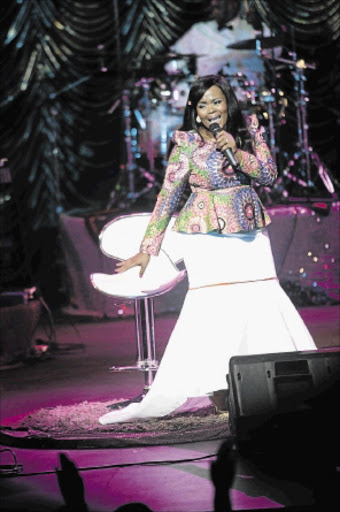 SHE'S GOT IT: Tebello Sukwene has an album out, a tour on the cards, and will soon be releasing a book PHOTO: Veli Nhlapo

IT'S hard to keep up with gospel singer Tebello Sukwene.

The 34-year-old released her debut album a few months ago, has a book coming out and has a tour on the cards.

Sukwene was introduced to the music industry as a teenager by producer Sizwe Zako.

She was with Joyous Celebration for four years before leaving in 2012 to pursue her solo career.

Her album He's Alive, released in November, made number one and remained in the top 100 iTunes charts for more than four months.

She is nominated in the best contemporary gospel album category for this year's SAMAs.

Her journey has been inspirational. Born in Springs on the East Rand, she honed her skills as a backing vocalist for Lira and Simphiwe Dana.

Her time with Joyous Celebration was educational experience for her.

"Working with Joyous was a huge pleasure because it also taught me how to work with other people," Sukwene says.

"Working with such a group is something different. It was a great platform to launch what I planned to do and I learned so much."

After leaving, she started the Nice Life Productions label with her husband Bafana Sukwene, who is an executive producer of her music and a drummer.

"Working with my husband is nice because I think he understands me. I am the kind of person who has difficulty expressing myself. I might say things that do not make sense to other people, but he understands it so much better," she says.

"Beyond that, I am able to trust him more than anyone else. I know that he has my best interests at heart and I don't have to worry that he will exploit me or give me half of what I should get.

"At home it is not always work, I am a mother and a wife. I have three children."

Musa features on Sukwene's song Save Me.

"Music is powerful," Sukwene says. "Gospel is a very sensitive issue. We are dealing with human beings and souls. It is more than just me, it is about God.

"Though He gave me the talent to sing my lungs out, I have to remember that it is about Him at the end of the day."

She is currently working on a single titled Worthy Is the Lamb and is writing lyrics for singer Ntokozo Mbambo.

"I have a soft spot for women. I want to show other women that we can stand together and come up with bright ideas."

Her book will inspire others, she says, as well as her He's Alive tour planned for later this year.

"I have been through a lot. First of all, I grew up without my dad and it affected me badly. Also, I've been in a terrible and abusive relationship in the past.

"Sadly, as a girl I think when your father is not around you do not know what love is.

"There is a lot I want to touch on and I want this book to inspire young women."