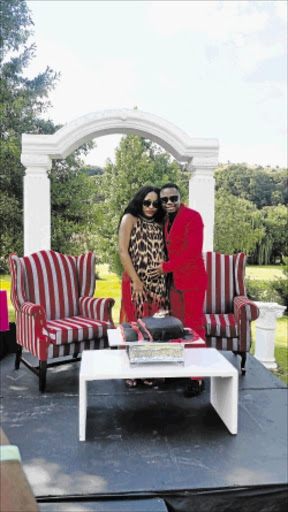 joined at the hip: Gugu Khathi and her man DJ Tira at their 'baby launch' which was graced by local celebrities photo: Mashoto Lekgau

NOT one for small measures, flamboyant DJ Tira threw a trendy baby shower for his wife Gugu Khathi on Sunday afternoon.

The intimate and exclusive affair touted as Baby Launch was held in the gardens of the high-end Makiti Wedding and Function venue in Mogale City near the Cradle of Humankind on the West Rand.

The bash had all the trappings of an extravagant affair with a mini concert and a fashion show in the offing.

Jacqui Carpede from pop group Jamali performed as well as Gugu Shezi. Both artists are associated with Khathi's company.

Carpede sang after the opening prayer delivered by Gugu's mother. Carpede later took over as the MC and introduced former Generations star Anga Makhubalo (who goes by the name NaakMusiq) to serenade guests.

To add a fashionable zing to the day, designers such as Scalo, TK, Em Tee Thoughts, Kabelo, Fabro Sanz and James Holt showcased their latest collections on a ramp especially created for them.

The guests, mostly dressed in all black as per the invite, were treated to some fine food and drinks flowed freely.

The couple of honour sat quietly at the far end of the garden in two big seats with a white arch above them in a setting that resembled a throne.

That the event started three- and-a-half-hours later seemed not to have irked the guests whose spirits were not dampened.