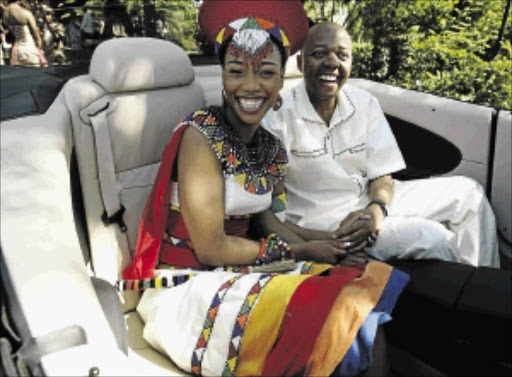 I do ... or do I?: Sonia and Leslie Sedibe's marriage is over, and the actress confirmed she has moved out PHOTO: Muntu Vilakazi

CELEBRITY couple Sonia and Leslie Sedibe's year-and-a-half long standoff over who would move out of their Sandton house is over.

The actress and the legal eagle, who are going through a divorce, now live separate lives after Sonia packed her bags last month.

A source close to the Sedibes said the actress-turned-businesswoman, known for her role as Ntombi Dlomo in Generations , "thought the man should move out, but the man too thought she should move out" .

The informant said: "The house she now lives in apparently belongs to the same friend who was in the newspapers with her when she was reported to have gone partying without her wedding ring.

"He told her he has some files on her dating life and she eventually caved in and moved out."

The couple have two children together and the actress has a son from a previous relationship.

She now allegedly lives in a house in an upmarket Johannesburg northern suburb.

Earlier this year, Sonia laid charges of assault against her former domestic worker Noleen Zhangara, who pleaded self defence and claimed that the actress had instigated their alleged physical brawl when she punched her in the face first.

Yesterday Sonia confirmed that she moved out but rubbished any "drama" linked to the move.

"I am divorced. When your marriage is over, you are supposed to find a place to stay. That happens all the time. There is no drama there, it is done. People move on."

Asked if there was a stand-off over who should move out, she answered: "There was no such thing, I was speaking to Leslie this morning. We are proper."

When asked for comment, Leslie said: "I am sitting in an office with my kids so I cannot talk. I do not have a comment."