Bouwer takes it all in her stride 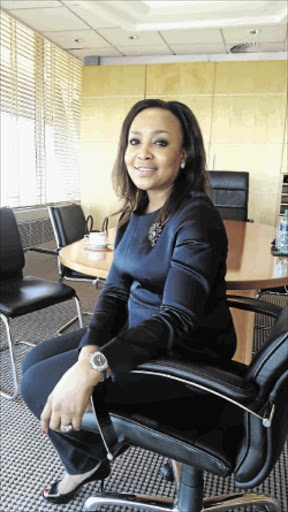 CAROL Bouwer's days as a Generations star are but a distant memory.

The cute and smart, yet delicate, Kgomotso character has morphed into a steadfast business-savvy woman.

She sits comfortably in the boardroom of CB Productions on the 20th floor of a Cape Town skyscraper with breathtaking views of the Atlantic Ocean harbour with multitudes of ships and tankers getting on with their business.

We meet on a busy day in her schedule and she runs in from another appointment without breaking a sweat.

Bouwer is still on a high after the success of her Mbokodo Awards held last month in Johannesburg to celebrate women in the arts, with top honours given to Mahotela Queens.

"Everything I do is for women. I always have to defend myself that I'm not anti-men.

"I'm a feminist but I love men, I'm raising a beautiful man who will hopefully be a great husband to somebody," she says.

"I believe that South African women were at the bottom of the food chain for the longest time. We need affirmation more than men."

After a successful three-year run, Bouwer looks back at the awards with contentment.

"I'm very proud of what we do and how the Mbokodos have evolved. Our contract ends next year so I'm hoping that I'll be able to carry it forward without the department [of arts and culture] and make it a commercial venture. Hopefully, the department will still endorse us," she says.

"I'm sure you've seen how I've been burned by working with government, so I want it to be commercial," she says, referring to former communications minister Dina Pule and the ICT Indaba debacle that landed Bouwer in controversial headlines.

But she doesn't bat an eyelid as she embarks on the detour.

"This has been my life," she says of her commitment to the arts.

"I've always loved theatre, so I don't feel like I'm working when I [go] to East London to watch some obscure theatre. I collect art."

In one of her reincarnations, Bouwer was a co-host of the popular women's talk show Motswako on SABC2, which she produced.

Now she has settled behind the scenes. But the show has lost some shine since it was moved from its prime time slot to a 6.30pm slot.

She agrees with me that the move was counter-productive for a show that was appointment viewing at 9.30pm on Mondays. "It [the move] unfortunately didn't take into account who the audience is," she shares.

"The show is about migrating women to the next level at all times. We should always be in conversation with them and, while I'm grateful to the SABC, it's unfortunate that in [the new] time slot the majority of women are at the back of a taxi, making their way home or are busy making food for their families or helping their children with homework.

"When we schedule for other race groups, we're sensitive to their lifestyles. But when we schedule for a group that has not had programmes tailored for them, we're insensitive to what the dynamics are. I don't want my commissioning editor to think that this is an attack, but it's an unfortunate time slot. But for that time slot it has done well, it has increased the numbers."

She is also happy with Mapaseka Mokwele, the host whom she describes as intelligent and talented and has invigorated the brand.

Forever buzzing with ideas, Bouwer's time is also consumed by an ambitious multi-million rand project called Khayelitsha Pier, which will see a new suburb spring up in the waters near the township following land reclamation.

"They are still doing the Environmental Impact Analysis. If we could be turning the sod next year, I would dance on a table somewhere."

She reasons that after having grown up in a township in spaces that left residents disempowered and feeling not good enough, this will go someway in restoring black pride.

"It's important that we restore our dignity as a people and it begins with where you wake up. When you wake up in an environment that doesn't affirm you, then you have no chance.

"We can't leave it to government to be the provider of all solutions in terms of where people live, business will have to come in there and the creatives."

There's no predicting what she will emerge as in the future.